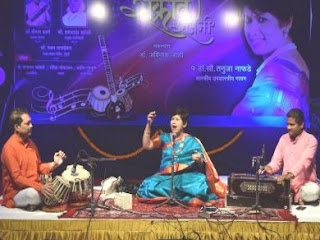 On the occasion of Makar Sankranti, a musical bonanza 'Sankrant Rajni' was organized by city psychiatrist Dr Avinash Joshi, founder of Museum of Brain and Mind. Tanuja Nafde, a semi-classical Hindustani music singer and faculty at RS Mundle College, headlined the event held at Scientific Society Hall, Laxmi Nagar, on Saturday evening. She began with raag Yaman in vilambit dhun. She followed it with a tarana and thumri, 'Saware aijaiyo.' Rambhau Khandwe, chief of Janardan Swami Yogabhyasi Mandal and noted playwright Dr Ranjan Darvekar were the chief guests at the event. Janardan Swami Yogabhyasi Mandal has been rendering free yoga to all for the past sixty years while Darvekar helms Ranjan Kala Mandir and has performed and directed many plays.

Nafde is known for her album Rang Do (2011) for which she had collaborated with Hariharan. She has represented 'India at Peace' concert in Moscow and done several concerts in India. She was accompanied by Prabhakar Dhakde on violin, Sandeep Gurnule on harmonium and Sandesh Popatkar on tabla. "Dhakde is a known name when it comes to violin. Sandesh Popatkar is a famous when it comes to tabla. Nafde is my music teacher and I wanted to help spread knowledge about her talent. She deserves solo shows and opportunities," said Joshi, who also conceptualized the show. Well-known sitarist and haematologist Dr Shriram Kane helmed the other half of the show, playing soothing melody in raag 'Vachaspati.' Kane has been playing sitar since the age of five. He has performed at several concerts in India and is an 'A' grade artiste at All India Radio. "He is a childhood friend and is immensely talented," adds Joshi, who himself is an amateur singer and pursuing MA in music.

Museum of Brain and Mind is an initiative by Joshi to contribute to psychiatry by providing people information about workings of brain free of charge by showing its facets like its anatomy, physiology, psychology, psychiatry, neurology, neurosurgery, parapsychology, philosophy, sexuality and spirituality. In this museum, an attempt has been made to show all its facets through displays, written in simple Hindi, using ample self-illustrated and bright images.