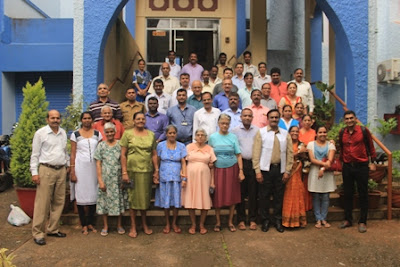 All India Radio, Panaji, celebrated the completion of 70 years of our country’s Independence in an innovative manner by inviting Senior Citizens who were born before Independence as Chief Guests for the Flag Hoisting Ceremony and cultural programme.
Shri DevidasSudame, Deputy Director (Engineering) & Head of Office, gracefully invited Senior Citizens Irene Pinto and Jerome Correia to join him in hoisting the tricolor at 8.30 am.
This was followed by staff members Vijay Parwar, Swati Maujekar and SitaramBhogle singing some popular patriotic songs.
The highlight of the morning was when Senior Citizen Maria Luisa Carvalho sang some unforgettable classics to the delight of the crowd. In keeping with Hon. Prime Minister ShriNarendraModi's appeal to avoid wastage of roses and bouquets, AIR Panaji's Club greeted the Senior Citizens with a Hand Towel on the ocassion.
YograjNaik on the sitar, Vishnu Shirodkar on the Keyboards, PrasunChaterjee on the table, PAmonkar on the Octopad joined together for a beautiful rendition of VandeMataram
The Guest of HonourShriVinayakVolvoikar, Director of Provedoria- Goa’s Social Welfare Department spoke on the occasion.
ShriDevidasSudame, Head of Office, AIR, Panaji proposed the vote of thanks.


Staff Announcer ShakuntalaBharne compered the programme.
Posted by PB Pariwar at 7:00 AM