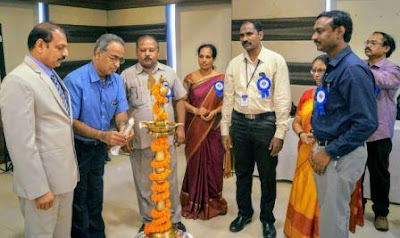 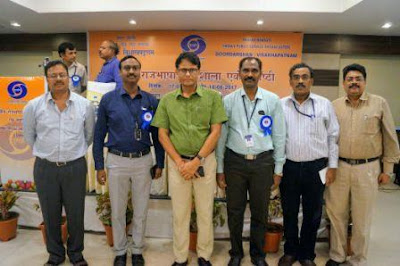 Regional Ofifcial Language workshop & Seminar (South Zone) was held in Visakhapatnam on 17th and 18th of August 2017. Sri Satya Prakash, Joint Director (Official Language), DG:Doordarshan, New Delhi chaired the above two days conference. The programme was started with prayer followed by lighting of lamp by Sri G. Nageswara Rao, Vice Chancellor, Andhra University, the Guest of Honour and other invitees. After Inaugural Ceremony by Sri Satya Prakashji, Sri S.M.Iqbal, Professor, Andhra University, Visakhapatnam has given valuable suggestions for improvement of usage of Hindi in Southern part of India. Sri Raju Vergheese, DDG(E), AIR & Doordarshan, Chennai addressed the gathering in the Inaugural session.In the second session, Sri Aruni Trivedi, Lecturer, HTS, Visakhapatnam explained in detail the implementation of Official Language in Govt. Offices and the problems facing in implementing the same. He cleared the problems faced in general in implementing OL in day to day work. It was a very fruitful session.The last session of the Day completely belongs to Sri Satya Prakashji. He vividly explained the various orders relating to OL and its implementation.

Session 1 of Day 2 was the most relishing session. With the permission of DG:Doordarshan, New Delhi, a complete session was arranged on GST, the debate of the present day. As most of the delegates from South Zone were being attended, to get clarity on the most common doubts, it was arranged. Senior Officials from Customs and Central Excise, Visakhapatnam have been invited. They gracefully respond and made the session very interesting and interactive.In the 2nd Session, Sri Satya Prakashji elaborately explained the targets and the tips in achieving them as per the Annual Calendar. He also explained the Parliamentary questionnaire on usage of Official Language.

Sri Mukul Saran Mathur, Divisional Railway Manager and Chairman TOLIC, Visakhapatnam attended the last session as a special invitee and shared his views for better implementation of Official Language. The closing ceremony was ended with Vote of Thanks by Sri C. Subbarao, DE, HPT, Visakhapatnam.The entire event was well compared by Sri Varadarajan, AD (OL), O/O ADG, Bengaluru. In fact, it is not exaggerate to say that his comparing made the event even more colourful.
More than 50 delegates from various field offices of South Zone viz. Heads of Offices along with their Hindi Officers took part in the above seminar. The staff members of HPT & DMC Visakhapatnam and its attached Relay Centres contributed in making the event a grand success under the guidance of Sri C. Subba Rao, DE, HPT, Visakhapatnam and Sri J. Krishna Rao, DDE, DMC, Visakhapatnam, duly following the instructions issued from time to time by DG:Doordarshan, the event planner and sponsor.