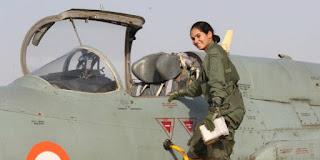 Avani Chaturvedi is the First Indian woman to fly one of the most powerful fighter aircraft MiG-21Bison singlehandedly. The 24-year-old Avani has become the sensation in India after she achieved this feat. She is among the first three women fighter pilots of India along with Mohana Singh and Bhawana Kanth.

Avani Chaturvedi hails from Satna district in Madhya Pradesh and was born on October 27, 1993. Her father Dinkar Chaturvedi is an executive engineer in water resources Department in MP government whereas mother is a housewife. The one person who has a lot of positive impact on Avani since childhood is her elder brother. Her brother is an army officer and one of the main reasons for her interest in defense services. She did her schooling from Deoland, a small town in Shahdol district of Madhya Pradesh. She then went on completing her Bachelors in Technology in Computer Science from Banasthali University, Rajasthan in 2014.

Avani always wanted to conquer the skies so she joined the Flying Club in her college which also helped her a lot. She cleared the Indian Air Force Exam as soon as she completed her Bachelors in technology. After getting selected in IAF, she went through a one year of rigorous training at Air Force Academy at Dundigal, Hyderabad. She was one of the three in the first batch of female pilots along with her two cohorts, Mohana Singh and Bhawana Kanth. In June 2016, they three were inducted into the Indian Air Force at the post of the fighter squadron. They were formally commissioned by then Defence Minister Manohar Parrikar. Avani became the first Indian woman to fly MiG-21 fighting aircraft in her first solo flight which started from the IAF base in Jamnagar, Gujarat on 19 February 2018 and history was made.

Avani Chaturvedi, has proved that if you have passion and love for the cause then there are no boundaries and even sky is not the limit. It is true that dreams do come true, we just need to be dedicated towards our goal. The feat of Avani proves that women are no less than men in any field and any aspect. We believe her achievement will help more and more Indian women to break the boundaries that confine their talent and respect.

Source and Credit : http://www.drilers.com/avani-chaturvedi-first-indian-woman-to-fly-fighter-jet
Posted by Ujwala Bhave at 7:00 AM