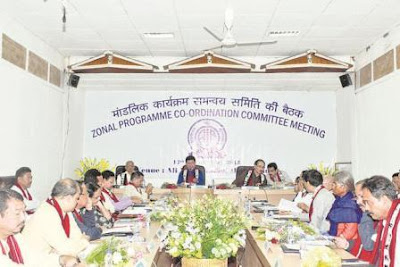 A first of its kind app for live steaming is being developed by Naga engineers under All India Radio (AIR) Kohima and is on a test transmission at Kohima station. Deputy Director General (E) K.V. Ramachandran said this in regard to linking and live streaming of all stations in the North Eastern region, while he was speaking at the two day meeting of All India Radio Stations Zonal Programme Coordinating Committee (ZPCC) of the North Eastern Region that began on Thursday in Mokokchung. Ramachandran was representing the ADG (Engineering) section.

According to a press release from AIR, Ramachandran expressed the hope that once the software was confirmed it would be used in all the stations for live streaming. He stated that the AIR stations coming together would facilitate the strengthening of the face of the stations in the region. He called upon the members to optimally utilize the available facilities to see desired improvements of the stations both infrastructural and technical.

Also speaking at the meeting, North Eastern Region adviser, D.N. Basumatari stated that the meeting will dwell on relevant issues stressing more towards progress and better linking of all stations. The adviser also expressed his concerns about the fiscal prudence of the stations and urged all the members to implement austerity measures. Basumatari also requested the stations to give their best efforts to plan balanced programmes that earn revenue while delivering the best programmes to listeners. Appreciating AIR Mokokchung for successfully hosting the maiden ZPCC meet, Basumatari said it had made a historic mark, and wished for sincere deliberation among all the members to arrive at a positive outcome for the welfare of the people.

During the discussion hour representatives discussed issues related to conducting programmes, studio refurbishing, studio and transmitter linking problems, FM transmitter requirements for wider coverage of NES programmes, transfer policy of staff, among others. The participants also raised points on technical hurdles regarding broadcast of programmes and sought ways to cope with the changing scenario in the broadcasting sector.

In her welcome address Head of Office AIR Mokokchung, Abeno Lasuh extended warm greetings to the guests and wished a for a progressive outcome of the meet. Earlier, the members also paid tribute to, and offered a silent prayer for, the departed officials of AIR stations.Later in the evening, the visiting guests of the sister states were enthralled by local artists with cultural and various presentations. The meet being held at the Metsuben Conference Hall is organized by AIR & DDK NEZ Guwahati and hosted by AIR Mokokchung. Senior officials from Zonal ADG offices of North Eastern states and top programme officials from 26 Radio Stations, including Sikkim stations, are attending the meet.

On the second and final day (Friday) the meet will deliberate on Administrative matters and visit some promotional centres under Mokokchung district.

Source and Credit :- http://www.nagalandpost.com/channelnews/state/StateNews.aspx?news=TkVXUzEwMDEzMzA1Ng%3D%3D
Forwarded by :- Shri. Alokesh Gupta,alokeshgupta@gmail.com
Posted by PRASAD KARADKAR at 7:30 AM