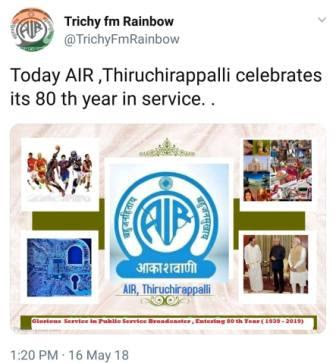 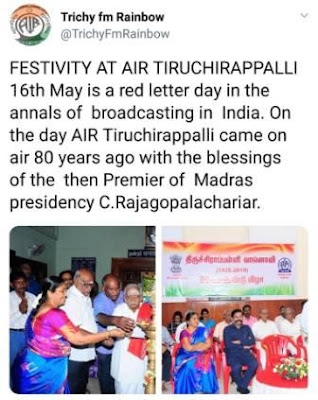 All India Radio, Tiruchi, stepped into the 80th year of its transmission on Wednesday with a special two-hour programme that tried to encapsulate the best of its features as a public service broadcaster. “AIR Tiruchi is a rare treasure that has made people aware of the value of independence and democracy,” said District Collector K. Rajamani inaugurating the pearl jubilee celebration. The function also featured live performances by folk dance troupes, Carnatic vocal and instrumental artistes, and speeches by leading orators.
The station, one of six pioneering stations in pre-Independent India, and the second in the erstwhile Madras State after Chennai, was established on May 16, 1939 with a 5 KW medium wave transmitter from a rented premises in Tiruchi’s Williams Road. The inaugural message was rendered by C. Rajagopalachari, the then Chief Minister of Madras State and Lionel Fielden, the first Controller of Broadcasting.
The station today functions from its own building on the Bharathidasan Salai, and caters to 10 districts – Tiruchi, Peramabalur, Ariyalur, Karur, Salem, Namakkal, Thanjavur, Tiruvarur, Nagapattinam and Pudukottai. From the original 100KW high power transmitter that was installed in Inamkullathoor in 1988, AIR Tiruchi has been shifting to digital ‘tubeless’ transmission from 2015. “Digital transmission has allowed us to save power, and also ensure a break-free broadcast,” M. Vasuki, Deputy Director General, AIR Tiruchi, said at a press briefing yesterday. “Besides creating a clear recording quality, we are also able to maintain the equipment in a smaller space, and with greater ease,” she added. The audio archives of the station are also in the process of being digitalised, said Ms. Vasuki.
AIR Tiruchi has three channels – the youth-oriented FM Rainbow, news and information-heavy Primary, and the 24-hour Carnatic music Ragam DTH (produced in collaboration with AIR Bangalore) – to cover topics ranging from agriculture and education to women’s issues, culture and literary appreciation. Considering the role of the station in covering agriculture, a key occupation in the Cauvery delta districts, AIR Tiruchi has adapted its programming to suit the times. “To address the crisis in the agricultural sector, we make sure that we include elements in our daily programming that will be of use to farmers. Concepts such as organic farming, crop insurance, soil health cards, and drip irrigation are examined in detail. We want to encourage young people to take up agriculture, and also to make the sector profitable,” said K. Natarajan, Head of Programmes.
The station’s 80th anniversary will be celebrated throughout the year with special broadcasts from the district capitals, with a finale on May 16, 2019 back in AIR, Tiruchi, added Mr. Natarajan.