TECHNOLOGY UPDATE - OmniPlayer to showcase radio studio of the future. 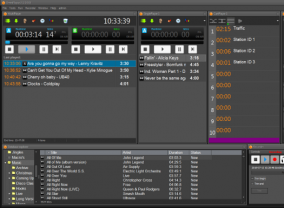 OmniPlayer is returning to the IBC show, to be held from September 14 to 18 in Amsterdam, where it will be introducing its newest generation of the popular OmniPlayer Radio Automation Software in a fully virtual radio studio. IBC is the one of the world's most influential media, entertainment and technology shows. Last year, in its 50th anniversary, IBC2017 had a record attendance attracting more than 57,000 attendees from 170 countries around the world, exhibiting more than 1,700 of the world's key technology suppliers and showcasing a debate-leading conference. Known for its widely deployed, easy-to-use and extremely robust OmniPlayer E2, the company is launching OmniPlayer 3 to keep up with the rapidly changing radio landscape where radio stations require more flexibility in the way they produce radio, allowing great shows to be created from any location on any device, inside or outside the traditional studio environment, and publish content to any platform.

“Major radio stations are faced with the growing challenge to stay relevant to a young audience, competing with popular music streaming services and an ever increasing amount of internet radio stations and podcasts,” said Peter van Klei – Director Sales & Marketing, OmniPlayer. “Allowing radio to be created from anywhere without moving bulky equipment around, removes the distance between radio hosts and the audience, allowing radio to be created with - and among - the listeners. Adding easy-to-use multi-channel publishing functions to reach a younger audience on the platforms of their choice.” OmniPlayer 3 is built to support these challenges by decentralising the radio automation functions and allow these to run as services on various hardware infrastructures, both locally and in the cloud. Its open architecture allows users to create radio from any location and on any device, controlled by HTML5 thin clients, connecting through a sophisticated RESTful API. Radio stations may even choose to develop their own OmniPlayer 3 web clients or integrate certain features within other applications running in a web browser. Alternatively, other applications can be controlled from the OmniPlayer 3 built-in web browser.

Furthermore, OmniPlayer’s multi-channel publishing tools make it easier than ever to not only make linear radio, but to also embrace on-demand radio through podcasting and social media publishing. To further reduce proprietary hardware investments in the studio, OmniPlayer supports both Audio as well as GPIO over IP, in all of the most-commonly used standards, allowing easy connectivity between devices and applications through standard IT networks. Additional to the core OmniPlayer automation software, a set of collaborative workflow and control tools are available such as the OmniReporter mobile app for journalists and OmniVeo visual radio to extend radio with fully synchronised video. Furthermore Sidekick, the virtual radio co-host, helps on-air talent to do their job even better by having automated news and traffic information, up to date artist bio’s and their latest tweets, etc at their fingertips.