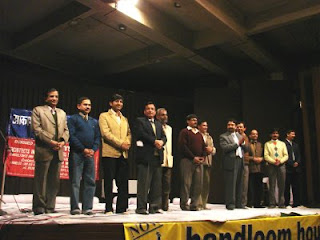 A group of officers of AIR Headquarters has started this initiative. The objective is to propagate, in particular, Indian music by holding concerts, publishing books, magazines, articles and, in general, revive the spirit of Akashvani to which all of us belong. This Manch was conceived and made operational in the year 2006. Since then the Manch has held several concerts within AIR premises as well as outside. The first major concert was held at Triven Kala Sangam, Mandi House, New Delhi on the 19th of December, 2008 which was a grand success. In the series of concerts held by the Manch, a concert was held at Bhivadi (apartments for the aged) which, again, was a grand success.
Posted by Akasvani Parivar at 11:28 AM 2 comments: