The five-day festival is being  organised by the department of art, culture and languages, Sahitya Kala Parishad and cultural group Seher in collaboration with Doordarshan.

Celebrating the grandeur of classical dance forms, the annual Ananya Dance Festival that begins here at Purana Quila Oct 2 will see artistes from different parts of India communicating through the language of performing arts.

The festival will be open to all and conclude Oct 6. The timings will be 7 p.m. to 8.30 p.m.Kerala-based Pallavi Krishnan, along with her group, will take the audience on a journey with Lord Krishna on the Yamuna river.

Playing with different rhythmic patterns through footwork will be Malabika Mitra`s group from Kolkata performing traditional Kathak, where Bindu Juneja from Bhopal will escort the audience to the Narmada river using the medium of Odissi dance.

Juxtaposing the happiness that the arrival of monsoon brings with the sadness that looms after rain-fuelled tragedy, Delhi-based Maitreyee Pahari`s groups will showcase varied moods through Kathak and Mayurbhanj Chau.
A Bharatnatyam show by Bangalore-based Kiran Subramanyam and Sandhya Kiran will begin with a colourful performance and end with a verse on Lord Subramanya, son of Lord Shiva and warrior god of the Hindu pantheon.
Extracts:-http://zeenews.india.com/entertainment/art-and-theatre/ananya-dance-festival-speaking-language-of-performing-arts_143519.html
Posted by Yogesh Hoshing at 9:06 PM No comments:

Despite all climatic, topographical, strategic and institutional odds, All India Radio Kargil is working wonders as a unit of Public Service Broadcaster in the border district of Jammu and Kashmir, Kargil. Real from Dawn of its existence, it has acclaimed great appreciation, name and fame amongst its audience here in Ladakh, Kashmir and across the border.

Strategically being in cross with Radio Skardu, the Propaganda Instrument of POK, the former has pushed the opposition to walls professionally. Kudos to all of those members of AIR Parivar who made it possible with their wit, wisdom and professionally calculated efforts.

For last a few years All India Radio Kargil is taking steps to develop a culture of a broadcasting unit with high standards of production and performance, with a meager available stuff and material for the same.

A two days workshop was organized in the Conference Hall of AIR Kargil on 28th and 29th of September 2013, to develop the skill of management among the Members of Casual Announcers Panel available for this station.All the approved casual announcers participated in the workshop, during which Programme Head Mr Nissar Naseem and Transmission Executive Mr Talha Jahanger Rehmani, discussed in detail the working of announcer’s studio, duty room, implementation of Cue-Sheet, Scripting of announcements and scope for innovations during transmission in capacity of an announcer.

For the first time Casual Announcers panel was given a concept of voice culture and classification of announcements. Participants appreciated and thanked the authorities of All India Radio for this special effort which they deserved and were in need of it desperately.Authorities are expecting a change in the attitude and performance of these young broadcasters after this workshop.

Despite of heavy rain, music lovers of Vijayawada enjoyed the 28th september evening Aakashvani Sangeeth Sammelan 2013comprising Nadaswaram recital of Thirukkalar Durai Bharathidasan & party, special dolu of B.Radhakrishnan of Thiruchi followed by vocal recital of Dr.Gayathri Venkatesan of Chennai supported on violin by Meerasivaramakrishnan,N.Ramakrishnan-Mridangam,Nerukunam Sankar-Kanjira. though program staff are small in number the station has  made it with good team support of all wings.

As per guidelines of Directorate General All India Radio the Hindi Pakhwara was organised at VBS AIR Mumbai from 13.09.2013 to 27.09.2013 .During this period three competitions for promotion of Hindi were held in which staff members of this station participated with great interest and 29 prizes were awarded.During this period one workshop on Hindi was also organised . In this workshop Dr R. Unyal gave information regarding use of Hindi in official correspondence and Use of UNICODE system.

The Hindi Pakhwara samapan was organised on 27.09.2013. In this Prized and certificates were distributed to the winners of competitions by Dy director(E) Sh K.C. Soni and Assistant Director(P) Ms Tanuja Kanade . Lively touch to the event was given by KAVYA PATH by Sh Shankar Yagdi (LDC) Sh Kamal Sharma(Sr Announcer) .Prog was conducted by Sh Rajendra Triphati ( Sr Annoumcer).Hindi officer Smt Manisha Jain encouraged the staff for more & more work in Hindi throughout the year.At the end of prog vote of thanks was given by Smt Anju Dhami ( Hindi Translator ).

Posted by Unknown at 9:12 PM No comments: 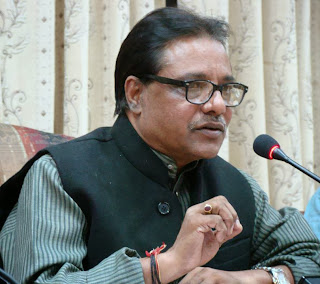 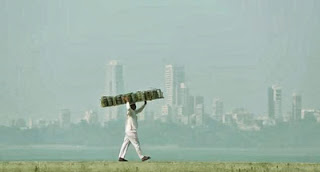 Siemens India has launched an innovative digital media campaign that uses a creative story telling technique to deliver the message to end customers. The latest digital media campaign is an extension of the Answers campaign followed globally by Siemens, which is aimed at establishing Siemens as a sustainable technology leader delivering a transformational benefit toward customers. Thought Process was the production house while Ogilvy was involved in the conceptualisation. The digital agency managing the campaign is Quasar (part of the WPP group), while the digital assets were created by Conrad-Caine, Munich. The social media agency involved in the campaign is LBI (part of Publicis).The campaign will run for a durationof six months.


“We have made the end-user the protagonist as well as the narrator of the story. We have kicked off the story series with the dabbawalas who use the Mumbai local trains to deliver lunch to over 200,000 office-goers and residences on time. We have brought the element of story-telling right into our creative approach,” says Siemens India head of digital media Sudhir M D.

In the integrated digital marketing campaign, where social media is complemented by a QR code initiative, on-ground and off-line promotions, a dabbawala named Kiran Gavande narrates his story, establishing how he goes about his life. The online banners direct the website visitors to the video on YouTube brand channel of      Siemens, which then directs the visitor to the Siemens web site with details on the actual Siemens technology that has contributed to thedabbawala’s life. The ‘Answers’ program is designed to demonstrate the lasting impact of Siemens technologies to improve lives, improve cities and improve businesses for the better. This is achieved through a creative strategy designed to simply reveal the truth about Siemens, and reveal the brand’s greatness. In an age of increasing transparency, enabled by digital and social media, telling the truth is the strongest statement a brand can make, especially since target audiences can now very quickly discover what is a truth. 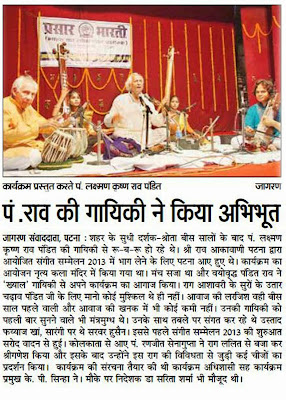 Posted by Praveen Nagdive at 3:53 PM No comments: 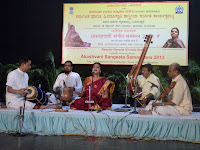 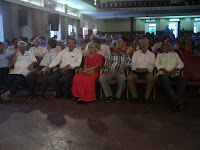 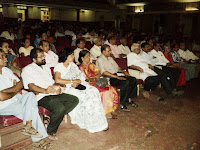 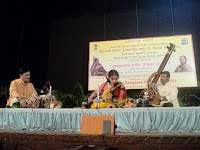 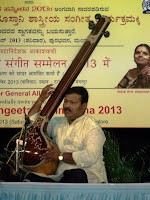 Mangalore, Sept, 28: Akashvani Sangeetha Sammelana-2013 was organised by All India Radio, Mangalore and presented two concerts at Town Hall, Mangalore, on the evening of Saturday, 28th Sept. 2013.
In the first concert Vidhushi Kolkatta Padmavathi Saranathan presented Carnatic Classical vocal.  Violin support was given by S. Ishwara Varma and Kolkatta  S. Aravind supported in Mrudangam.  Ghatam support was given by N.H.P. Rajarajan, Thiruvananthpuram.  She starts with  chakravaka raga,  Tyagaraja lyric, rupak tala, then presented Vandanadharini raga, Adi tala, G.S Balasubramanyam Lyric and ends with Chandrakoumsa raga, Purandaradasara lyric –‘kandena govindana’.  She bagged CCRT scholarship by the Govt. of India at the age of seventeeth and at present “A” Grade artist in All India Radio.
In the second concert Vidushi Kala Ramanath of Mumbai presented Hindustani violin and Vishwanath Nakod supported in Tabla.   She presented raga  Bihaag in the beginning  and ends with Raaga Bharavi.  With the mixure of traditional violin recital  with  old and new artist and she  invented Jhaaz, Famenko, African music etc.,  Mounesh Kumar Chavani supported shruti for both the above programme who is the staff artist of Akashvani Mangalore.
In the beginning Dr. Vasanthkumar Perla, Head of Programme and Asstt. Director welcomed the gathering and gave an introduction to the sangeetha sammelana.  Sri Muddu Moodubelle compered the programme.
A large number of music lovers witnessed the programme.  The programme will be  aired by all Akashvani kendras on  December 6th and 29th 2013 from 10pm to 11pm respectively.

Posted by Unknown at 2:58 PM No comments: