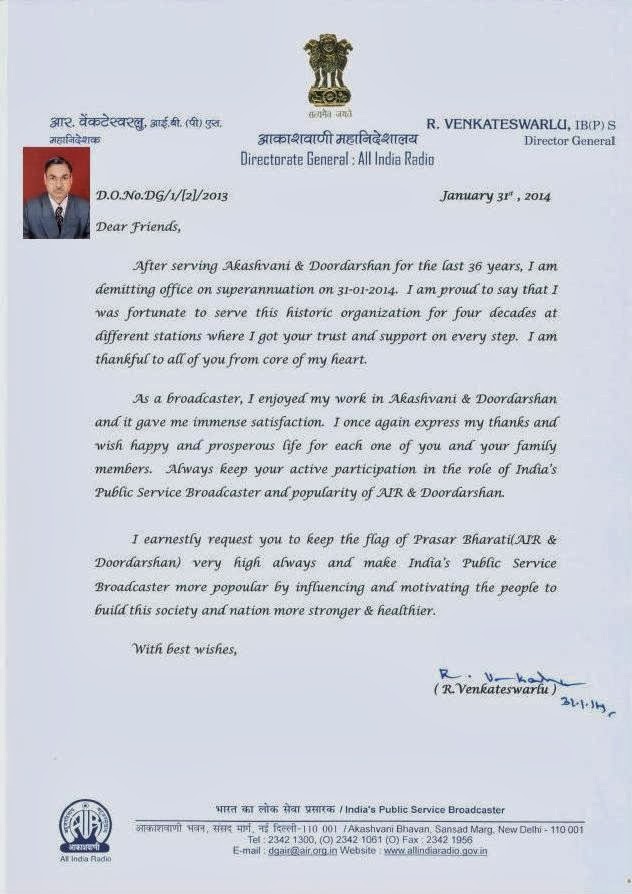 Email ThisBlogThis!Share to TwitterShare to FacebookShare to Pinterest
Labels: Messages 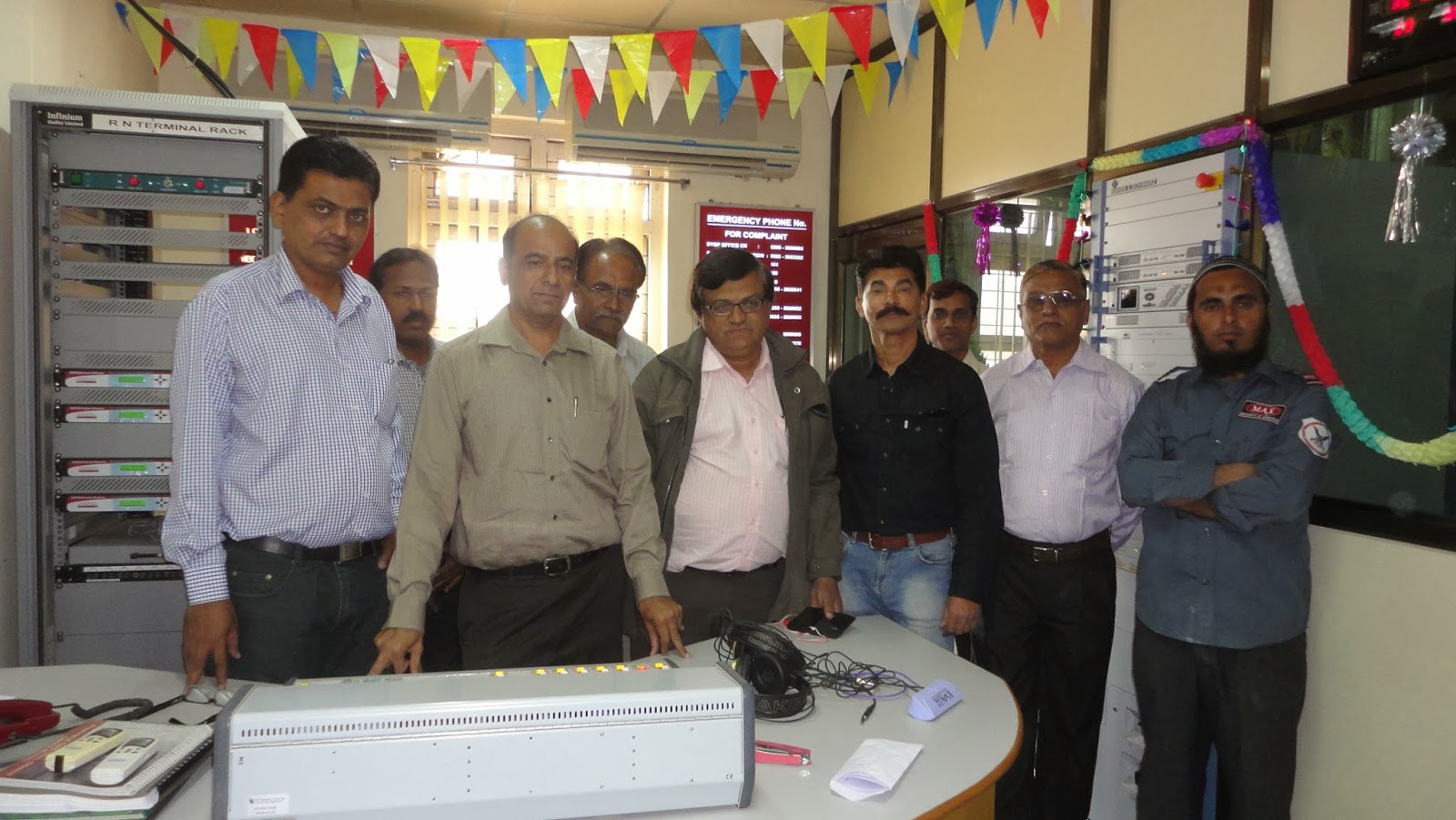 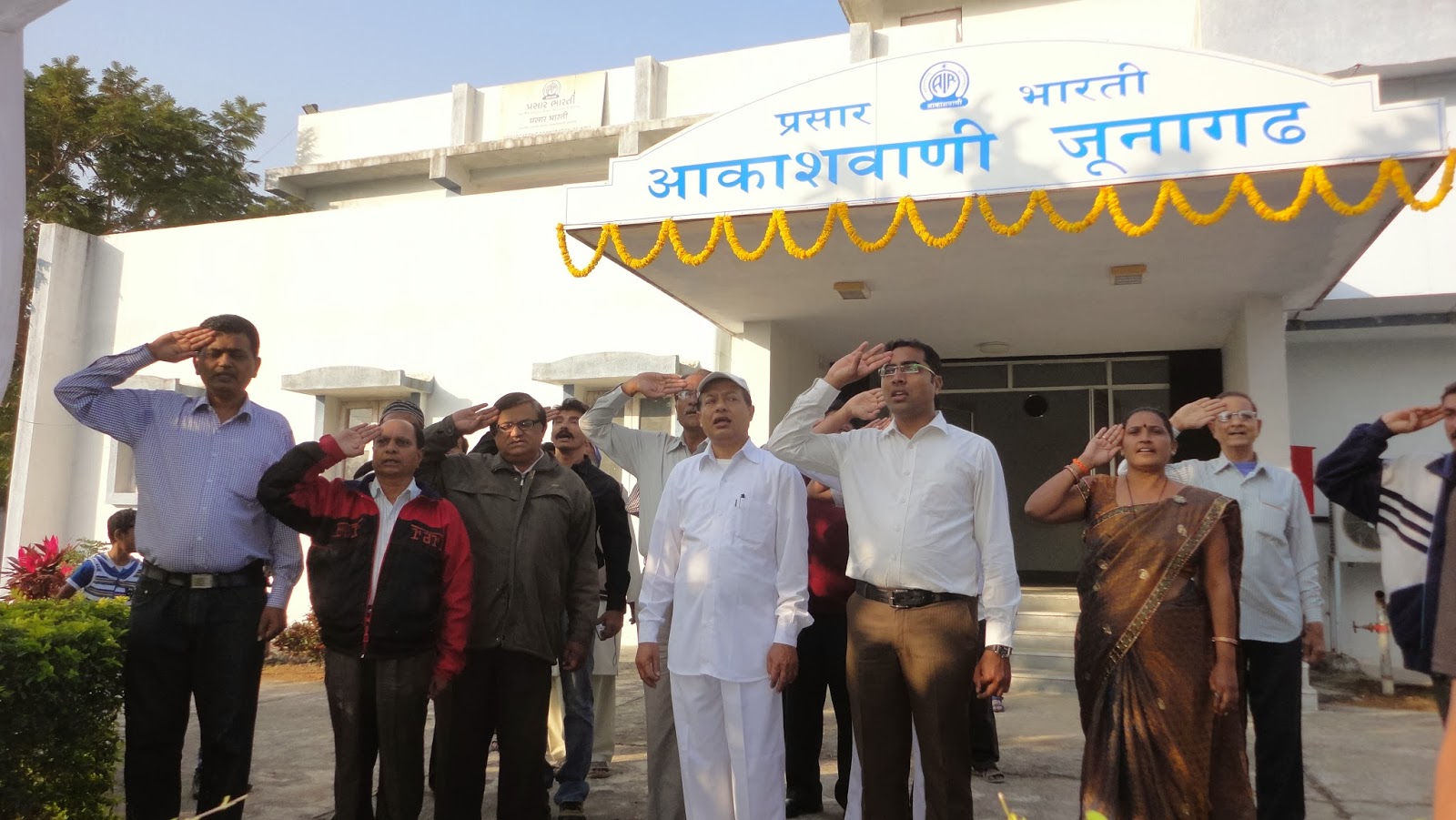 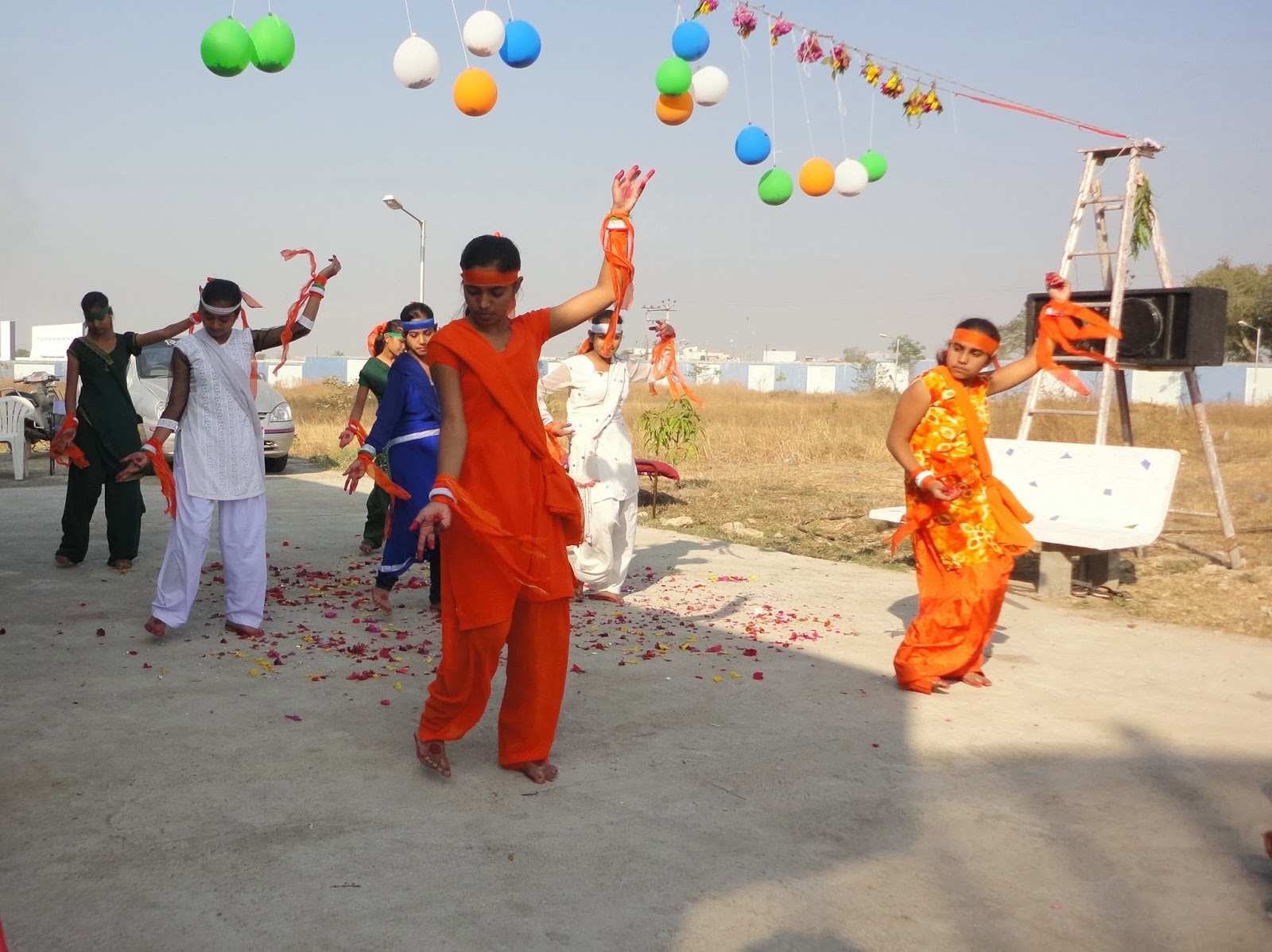 SHRI R. VENKATESWARLU DIRECTOR GENERAL ALL INDIA RADIO IS RETIRING ON SUPERANNUATION ON 31.01.2014.

BORN ON 01.02.1954, SH. VEKATESWARLU HAD 35 YEARS OF   MASS-MEDIA   EXPERIENCE  IN  INDIAN INFORMATION   SERVICE,  ALL INDIA RADIO. DOORDARSHAN  AND   PRASAR BHARATI  SECRETARIAT AND ALSO ADMINISTRATIVE, PERSONNEL AND FINANCIAL MANAGEMENT OF AIR AND DOORDARSHAN NETWORKS.

SH. VEKATESWARLU WAS SELECTED BY UPSC,  AS A DIRECT RECRUIT  STATION DIRECTOR AND GOT FIRST POSTING  AT  ALL INDIA RADIO, TIRUNELVELI (AS YOUNGEST STATION DIRECTOR AT THE AGE OF 33 YEARS IN THE NETWORK IN 1988). HE SERVED AS STATON DIRECTOR , AIR,  WARNGAL FROM MAY 1991 TO JULY 1994.

HE ALSO HANDLED PERSONNEL MATTERS OF STAFF OF AIR AND DOORDARSHAN, TRAINING AND THE PROCESS OF RECRUITMENT AT PRASAR BHARATI HEADQUARTERS AT DELHI AND ALSO ALL OPERATION ISSUES OF AIR AND DOORDARSHAN AT PRASAR BHARATI HEAD QUARTERS SUCCESSFULLY. LATER HE WAS POSTED AS ADDITIONAL DIRECTOR GENERAL ( SOUTH ZONE). SUPERVISING ALL INDIA RADIO STATIONS,  DOORDARSHAN  KENDRAS AND MARKETING DIVISIONS  IN SOUTH ZONE. HE TOOK OVER THE CHARGE OF DGAIR ON 01.11.2013.

PB PARIVAR EXTENDS IT’S BEST WISHES TO SHRI R.VENKATESWARLU FOR A SUCCESSFUL & PEACEFUL RETIRED LIFE. YOU CAN ALSO SEND YOUR GOOD WISHES TO HIM AT PBPARIVAR@GMAIL.COM OR CAN DO SO BY CLICKING THE COMMENT BUTTON BELOW.
Posted by PB Pariwar at 3:16 PM 4 comments:

Contributed by :  bharatbajaj@yahoo.com
Posted by PB Pariwar at 1:49 PM No comments:

Jawhar Sircar, CEO, Prasar Bharati has been given the News Television Network CEO of the Year ENBA 2013 Award 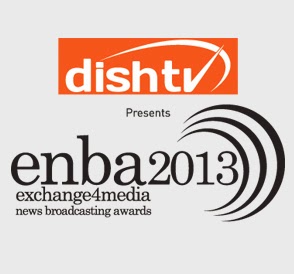 Shri Jawhar Sircar, CEO, Prasar Bharati has been given the News Television Network CEO of the Year – Hindi Award during  exchange4media News Broadcasting Awards (ENBA) 2013 event held at a glittering ceremony in Delhi on January 18, 2014
Shri S M Khan DG News has received the award.
The event was attended by the who’s who of India’s news broadcasting industry. In its fifth year now, ENBA 2013 recognises the best in television news – broadcasters, editorial personnel as well as industry leaders who are responsible for shaping the future of television broadcasting in India. This year, Awards were given across four broad categories – Programming, Personality, Marketing and Overall excellence. Dish TV is the presenting sponsor of ENBA 2013. 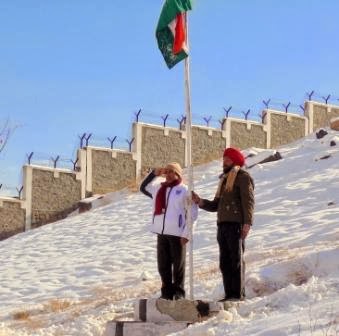 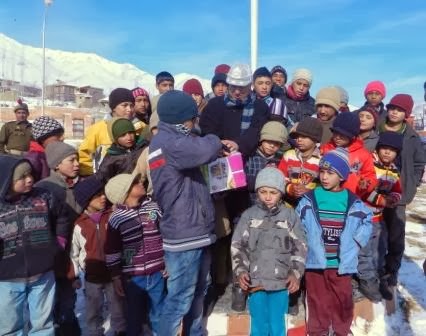 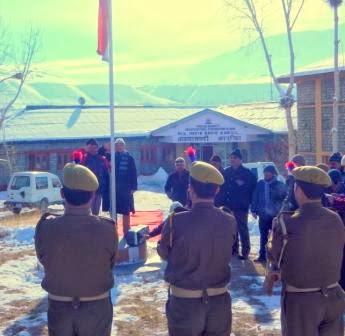 At the Studio Complex all employees of AIR Kargil and family members along with students of Bal Ashram Kargil participated in the Flag Hoisting Ceremony.

Speaking on the Occasion Shri Nissar Naseem HOO urged the Staff that we must participate in the national effort to eradicate the menace of Corruption from every nook and corner of our society.

On the occasion gifts and sweets were distributed amongst the students of Bal Ashram.

A special evening on the occasion of 65th republic Day was observed in the studios of AIR Kargil where Cultural Groups performed before invited Audiences. The Programme based on this Function was aired at 9.30pm Off Live on 26th of January 2014.

On 25th of January 2014 and on 26th of January 2014 Transmissions from AIR Kargil, 200 Kw HPT Kurbathang (AIR Kargil), AIR Drass, AIR Padum and AIR Tai Suru were extended as on Medium Wave and FM Transmitters to cover the Hon’ble Presidents Address to the Nation. The Purgi Version (Regional Language) of the Hon’ble Presidents Broadcast was also broadcast at 9.30 Pm on the same day from AIR Kargil/200 Kw HPT Kargil.

The Function at the District Headquarters at Khree Sultan Choo Stadium Biamathang Kargil where the Hon’ble CEC LAHDC Kargil Hoisted the National Flag and took the Salute on this Occasion, was also covered by the OB Team Of AIR Kargil and a radio Report was also Broadcasted from Air Kargil, Special Programmes with Songs of National Appeal were a part of the transmission on these Days.

The Transmission was Interruption Free, smooth and of highest broadcast Quality on these days. 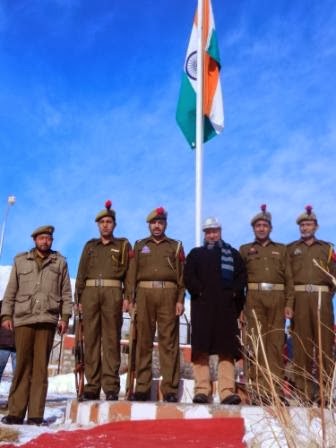 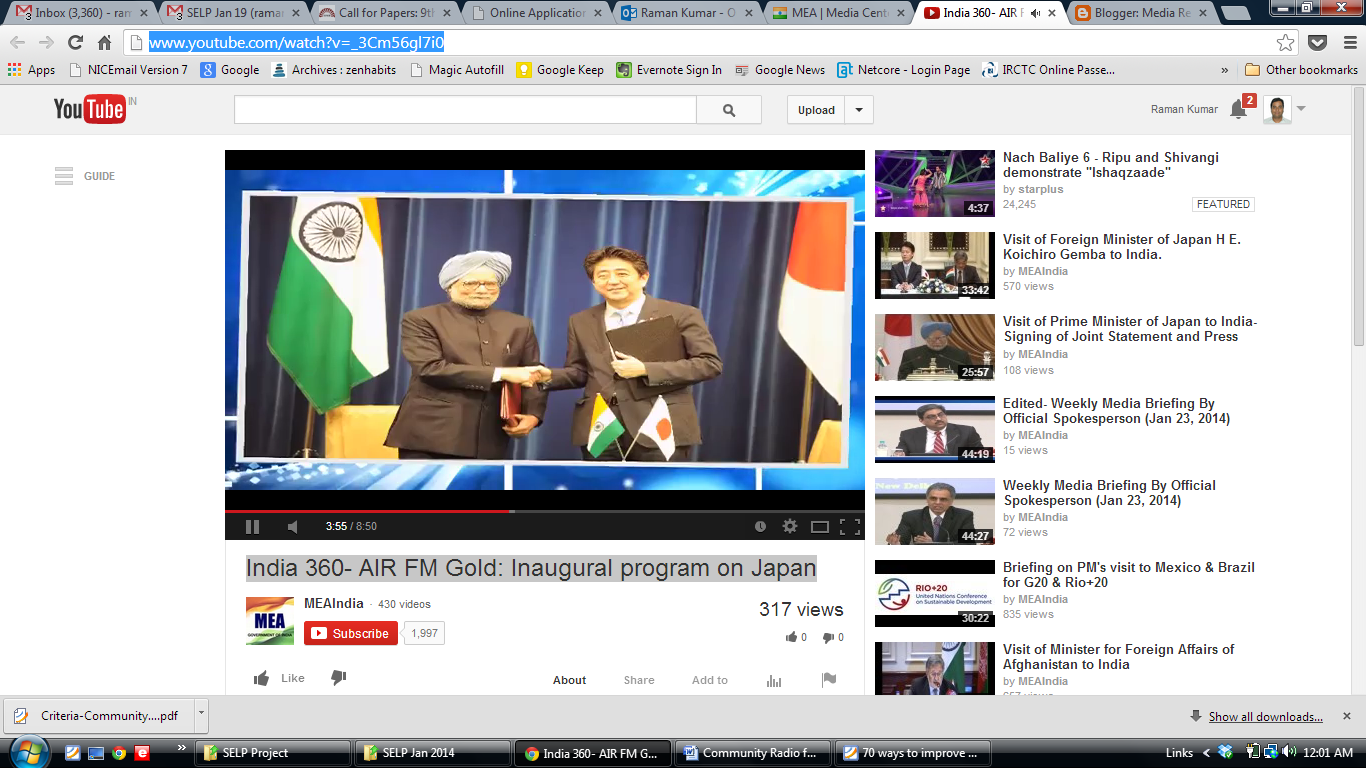 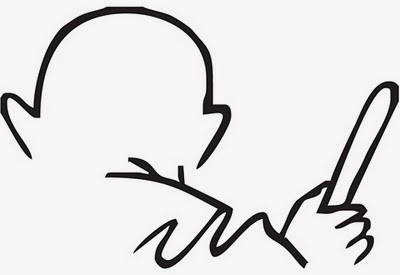 HOW does one write about a saint? Ever since I was asked to contribute an article on the passing away of Mahatma Gandhi. I have asked myself that question. As I sit down to fulfill my promise I am still not sure of the answer. I am a radio commentator, and I was flung by fate an9 circumstance into a ringside, seat from where I was destined to see the last heart-breaking days, hours and minutes of Bapu's last journey. To me it was a long night of tears-a nightmare of sorrow and tragedy which even to this day defies description. As time goes by and the pain of the moments slowly subsides, certain pictures register more clearly on my mind than others; These are the pictures I am going to write about - unusual pictures perhaps-but pictures I shall never forget none the less.

It was the morning of the cremation. I reached Birla House at 6 o'clock to .take Bapu's darshan before the crowds arrived, but already there was a long twisting line of mourners slowly filing past the windows of his room. I met a member of the household who took me by a private entrance into the room. there lay the great Mahatma, his fine broad chest uncovered. I shuddered when I saw the bullet-wounds-dark ominous patches of hate and madness. And then I saw his face'. What a wonderful face it was in death! As I looked; the face of the mourners melted into hazy nothingness, the smell of incense may  have been reaching me from some distance, garden in Paradise-the chanting, likewise; may have been the chanting of angels as Bapu's spirit climbed heavenwards. Only the face held me-the face among the flying rose-petals that cascaded through the open window. As I gazed at that face, words raced through my mind slowly penetrating the numbness of body and soul-words I had learnt so well in my childhood. Words that Jesus Christ used on (he Cross: "Father forgive them; for they know not what they do." Bapu's lips seemed to be moving and saying just that. His was the most forgiving countenance I have ever looked upon. As I stood there in silence, someone near me tried unsuccessfully to hold back a sob. I turned my head to look straight into the tortured face of India's Prime Minister, Pandit Jawaharlal Nehru. The look on his face was also something I shall never forget. I left quietly, left behind for a moment the greatest man of our age in that room of tears, tragedy and rose-petals………
……………………..
Source Credit and complete story at : http://www.gandhi-manibhavan.org/eduresources/chap3.htm 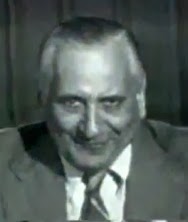 Late Sh. Melville de Mellow was the veteran broadcaster of All India Radio, who covered the last journey of Bapu.
Posted by PB Pariwar at 10:29 PM No comments: 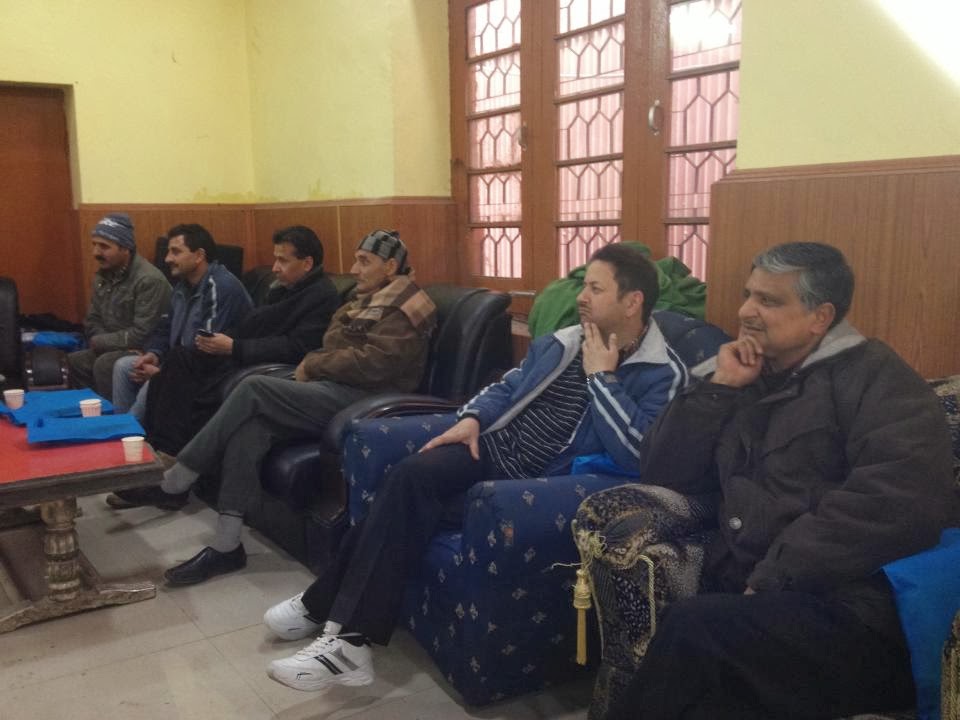 At DDK Srinagar, a farewell party was organized in favour of Mr.M Y Parray Pex DDK Srinagar who is going to attain age of superannuation on 31st Jan 2014,on this occasion many staff members spoke about the abilities and qualities of Mr Parray Sahib the party lasted for more than 2hrs, all staff members wished him a happy post retirement life.


What You Need to Know About Dante 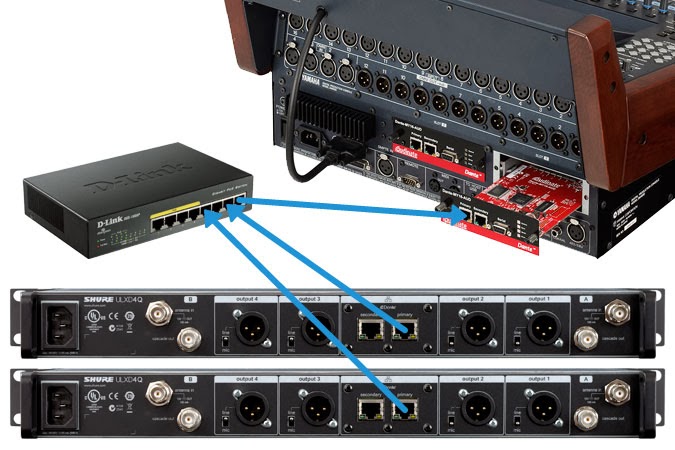 For the last couple of years, we’ve all heard the steady drumbeat of digital in pro sound applications. Digital audio networking systems that transmit and receive up to 64 audio channels over a single Ethernet cable, and more recently, digital wireless microphone systems. These solutions allow audio inputs and outputs from enabled audio gear (for instance, a wireless microphone system or mixer) to be routed using a user’s existing Mac or PC when loaded with the necessary software.  All inputs and outputs are carried as digital data running on lightweight, inexpensive Cat-5 cabling.

An emerging technology to the uninitiated, digital audio distribution has proven reliable and road-worthy in applications ranging from sound reinforcement at the G8 Summit and the Sydney Opera House to recording applications at a 500-member church in Vancouver, Washington.

Following are some of our friends who will be superannuating from AIR & DD on 31.01.2014 after giving in their valuable contributions to the organization.

Information about other retiring officers (of all grades and disciplines) may be added on the blog. Please mail details of retiring friends from your station to pbparivar@gmail.com .

Retiring friends may also like to address their friends through this blog for which they can send their photo & write-ups to pbparivar@gmail.com for possible upload on the blog.