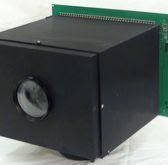 Computer scientists at Columbia University have made a video camera that can power itself. The rudimentary camera can capture an image every second of a well-lit scene while converting light into electric power.

The device is a step towards tiny, low-cost standalone cameras that could be useful for wearable devices and sensor networks. “For these applications to be successful, the camera has to be more or less standalone,” says Shree Nayar, a computer science professor at Columbia University. “You want to be able to deploy them and forget about them while they continue to function. And you want them to be really small and really cheap. One obvious way to make a self-powered camera is to attach a solar panel to a camera, but that’s not the most viable solution in terms of cost and size.”

The new camera could potentially also be used in mobile phones and smart watches, where, Nayar says, it could harvest energy for the gadgets when it’s not being used to take images or video.The idea behind the camera is that the exact same device—a photodiode, which produces electricity when exposed to light—is at the heart of both image sensors and solar cells.

Each of the millions of pixels in a camera image sensor chip is comprised of a photodiode. The diode is used in so-called photoconductive mode, where a high reverse voltage is applied across it, Nayar explains. When light falls on it, the current generated inside makes the voltage drop, and this drop is proportional to the brightness of light. This lets pixels measure the intensity of light falling on them.For a scene that has a reasonable 300 lux of brightness, the camera could create enough charge to indefinitely capture an image every second

In a solar cell, meanwhile, photodiodes are used in photovoltaic mode. They start with a zero voltage, and the current flowing out of the device is restricted so that the voltage builds up when it’s hit with light. Nayar and his colleagues came up with a new pixel circuit that allows the photodiode to measure light intensity but also harvest the light to generate electricity. It is a simple circuit with one photodiode (in photovoltaic mode) and two transistors.Others have made similar light-powered camera pixels before, but they’ve had complicated circuit architectures with many transistors and multiple photodiodes, with only part of the sensor area dedicated to energy harvesting.

To make the camera, the research team bought off-the-shelf photodiodes and arranged them in a 30 x 40 array on a printed circuit board. On the back of the board, each photodiode was wired to circuit components based on the new pixel architecture. This sensor array was attached to a microcontroller, an energy harvester circuit, and a supercapacitor.

During each image capture cycle, the pixels first record an image that is transferred to a computer, and then they switch to energy-harvesting mode. “First the sensor pixels are reset,” Nayar explains. “Then for fifteen milliseconds, they’re exposed to light and all the voltages are read out via the microcontroller. Then all the pixels are reset and exposed again to light, and the resulting voltages are poured into the energy harvester circuit that charges the supercapacitor.”

For a scene that has a reasonable 300 lux of brightness, the camera could create enough charge to indefinitely capture an image every second. And per the researchers’ calculations, they could optimize the sensor circuits to create a 210 x 200 pixel image per second. Or they could get a higher frame rate of up to 30 images per second by sacrificing resolution, Nayar says.Eventually, he says, “it would be nice to incorporate wireless communication. Then the camera would be completely untethered.”

The researchers will present the self-powered camera at the International Conference on Computational Photography at Rice University in Houston next week.

Contributed By: D Narayana Swamy,e-mail: dns_v@yahoo.com
Posted by Sangeeta Upadhye at 7:30 AM