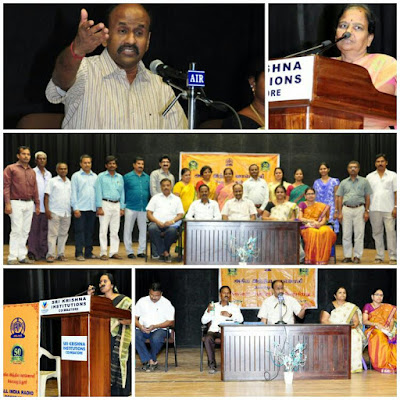 All India Radio Coimbatore has organised a special Pattimandram ( Debate) in Connection with Tamil New Year's Day on 3rd April 2017 at a College auditorium in Kovaipudhur.The topic of the debate is whether we study our literature for enjoying the language or following in our life?
இலக்கியங்களை நாம் கற்பது
இன்புற்று மகிழவா?
பின்பற்றி வாழவா?
The debate is headed by Shri.Marabin maindhan Muthiah renowned poet- writer and the teams included writers and Scholars.The debate was filled with quotes from literatures and well received by everyone.Smt.K.Chitralega , HOO ,All India Radio Coimbatore underlined the significance for such topic in todays technology driven world.Shri.G.Swaminathan , AD(P) thanked everyone who made the function a very grand success.The Special Pattimandram can be listened in State Network of Tamilnadu Primary Channels on 14th April 2017 at 11am.The same can be listened in FM Rainbow Network of Tamilnadu at 0302pm on 14th April 2017.
AIR Coimbatore can be listened inAM 999 Khz,FM 103 Mhz
Contributed By:T.K.Gayathridevi,PEx(Co),All India Radio,Coimbatore,phaircoimbatore@gmail.com
Posted by Sangeeta Upadhye at 7:00 AM