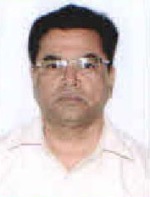 During his service career, he has also received special citations from DG(News), AIR, DG(DFP) and DG of Directorate of Public Relations, Ministry of Defence for providing quality and outstanding services to these media units/ organisations.