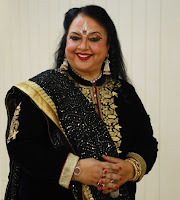 Former Doordarshan and All India Radio news reader and presenter Rama Pandey was conferred with the Vishwa Vageshwari Samman for her immense contribution to the arts in an event in Pune. Given by the Vishwa Hindi Sahitya Parishad, the award was given in the presence of spiritual Guru Shri Shri Ravishankar, former President of India Pratibha Devisingh Patil and Maharashtra Parliamentary Affairs Minister Girish Bapat among others. A multi- dimensional woman of calibre, Pandey has also served as a journalist with BBC Hindi, Voice of America, CBC Canada and Radio Netherland TV Centre Holland.

Besides this, she has also acted in films, has written, directed and produced many TV soaps. She has been constantly working to help promote the Indian culture not only in India but also abroad. Her TV show Jaane Apna Desh is specifically about India’s forgotten heritage. Pandey said she was using her experience in theatre, television and films to preserve the traditional arts. “I have recently started a foundation called Rama Theatre Natya Vidya (RATNAV) to protect the oral and folk art traditions of India. The idea is to give unconditional service to bring the folk artists involved in traditional oral arts before vast audiences,” she added. The Vishwa Vageshwari Samman is bestowed every year in recognition of the service in the field of art, literature, social service, journalism, education, health and cultural heritage.

Born and brought up in Jaipur, Rama started her career as a child artiste. She has played the role of lead actress in many popular plays like 'Shatranj Ke Mohre', 'Ashar Ka Ek Din', 'Bhumija', 'Kanchanrang', 'Jasma Odan' and 'Shuturmurg' etc. She has written, produced and directed many documentaries, telefilms and TV shows for Doordarshan and various Central and State ministries, PSUs, universities and other organizations. She has written books on women and children. 'Begum Bano Aur Khatoon', 'Faisle' and 'Suno Kahani' are her popular books. She has won many national and international awards for her contribution in the field of theatre and television.