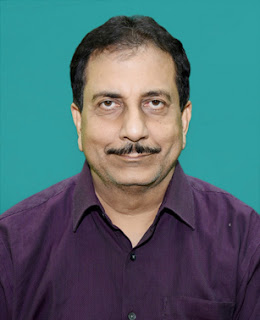 
Joined as a Transmission Executive on 31.05.1985 at DDK, Cuttack, Shri N.M.Satpathy was selected to the post of Programme Executive through UPSC in the year 1991.He was transferred to DDK, Bhubaneswar, DDK,Sambalpur, DD News, New Delhi, DDK, Agartala & again to DDK, Bhubaneswar in his service period spanning over 34 years 06 months. While working at DD News, New Delhi , he had the experience of producing National & International News in English, Hindi, Sanskrit & Urdu. As a producer, he got two Doordarshan Annual Awards for the production of "Krushi Darshan" in the year 2006 and for the "Live telecast of Crop Seminar" in the year 2007. His contribution as a Sports Producer in the Commonwealth Games, Melbourne, Afro Asian games, Hyderabad and National Games, Ranchi was immense . As a producer of different types of programmes and his multi-faceted talent, he has received many awards and appreciation from a number of organisations like OUAT, Chinta O' Chetana, State Agriculture Department, Sri Jagannath Chetana Gavesana Pratistahn, Puri etc. to name a few. As Head of Programmes at DDK, Bhubaneswar, he has introduced a number of programmes like Tathapi Jeevana, We the Soldiers ,Tike Katha Heba, Manoranjan Junction, Breakfast Show Hello Odisha, Satyam Param Dheemahi etc. The TV presentation of "Baidehisha Bilas" an immortal writing of Kavi Samrat Upendra Bhanja & "Tapaswini"- another immortal writing of Prakruti Kavi Gangadhar Meher has made Shri Satpathy popular among the literature lovers of the State. He has contributed a lot in the quality improvement of Commentary in the Live telecast of Car Festival of Lord Jagannath from Puri year after year. He is a knowledgeable , dedicated, hard working and disciplined officer of the organisation.