Inspirational:Born with No Forearms, 17-YO Artist Sings & Motivates Terminally-Ill Patients! 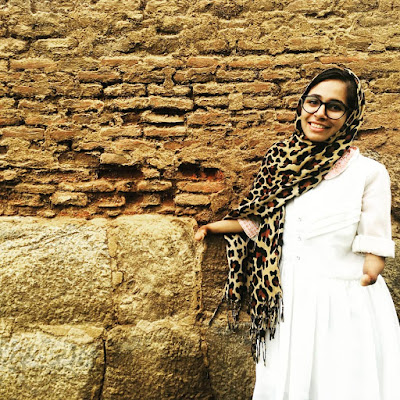 Today, at 17, Kerala-based Noor Jaleela is a budding artist who not only paints but also plays the violin, belts out songs melodiously and shares the stage with stalwarts such as KS Chithra and Stephen Devassy.


It was 2002, and Asmabi Kareem had just gone into labour. She and her husband, Abdul Kareem, a businessman in Kerala’s Kunnamangalam town , were ecstatic about the arrival of the newborn who would soon join their family of three.But when the doctor left the labour room, he had a troubled expression on his face. “Congratulations! You’ve been blessed with a girl. But, she is missing forearms and a foot.”
While it was a painful reality to process, Abdul and Asmabi only counted their blessings. They named the baby Noor, after the Arabic word for light, and promised to do whatever it took to ensure that she grew up to be a happy and healthy child.


In December 2017, ‘Dream of Us,’ an NGO working with children with disabilities, featured two of her paintings at their exhibition ‘Swapnachithra,’ at Kozhikode Lalitha Kala Akademi Art Gallery.
Noor grew up in a very sheltered environment. When she would get upset after seeing her able-bodied classmates in school, her sister, Aysha, would calm her by saying that her arms and feet would grow soon. “It was a white lie. But it made me happy,” says Noor.

While her family never treated her differently, the world could be a cruel place at times. “Strangers would stare at my underdeveloped arms, or pass comments on the way I walked. Many schools rejected me due to my disability.
“Once, when Aysha left her record book home, I mistook it for a colouring book and got to work. Though the record book was damaged, my parents realised that I could paint really well!” mentions Noor.In Class 7, when her school dedicated two slots of the day for extra-curricular activities, Noor’s best friend Shreya opted for the violin class, and she followed suit. 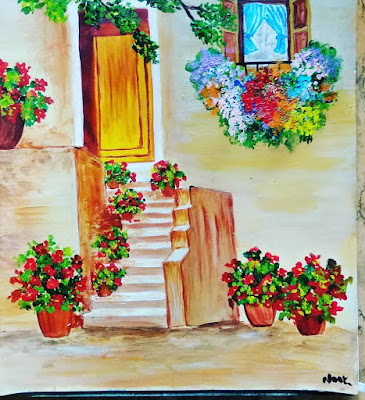 Noor Painting
Today, Noor is a student of St Joseph’s College, Devagiri, and wants to attempt the coveted civil service exams and become an IAS officer. She was fitted with artificial limbs at Medical College Hospital, Kozhikode, and can walk without much difficulty.
“Acceptance was the first step for me. I knew nothing could alter my condition, but that did not stop me from finding newer ways to make the best of my life, to explore my potential, undertake new skills and motivate others around me.”
She adds how her family and Dr Anwar Noor and her mother joined Dr Husain’s NGO as volunteers and have been impacting several lives over the last eight months.

Source & Credit:https://www.thebetterindia.com/201458/kerala-ias-disabled-painting-singing-drawing-noor-jaleela-artist/
Posted by Rashmi Rimjhim at 4:00 AM