Inspirational:Construction Worker By The Day, Writer By the Night: Meet This Incredible 56-YO! 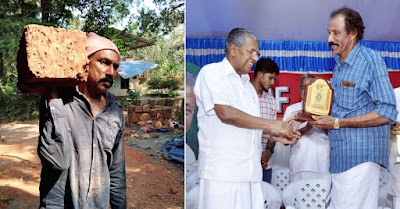 From dawn to dusk, he is just a daily wage labourer from the neighbourhood. Returning home from a hard day’s toil, he would settle at his writing desk and translate essays, stories and even entire books!

As a young tea shop worker in Bengaluru, way back in the late 1980s, Shafi Cherumavilayi, a native of Kerala’s Kannur district, would serve many workers who dropped in for a cup or two of tea and snacks. Some of them would have spirited discussions in Tamil, and Cherumavilayi was intrigued by the language enough to want to learn it.“But my limited resources did not allow me to join a proper course. So, every night, after the day’s work, I would try reading the Tamil film posters I collected. I would also read every pamphlet, note, newspaper or book in Tamil, brought to the shop by the Tamil customers,” recalls Cherumavilayi.

Today, the 56-year-old construction labourer is an award-winning translator of nine novels and hundreds of short stories in Tamil to his mother tongue Malayalam.Despite his exemplary literary prowess, Cherumavilayi states that translation and writing failed to earn him his daily bread, which is why he is now back in his native Kannur, supporting his family of five with masonry work.

Nevertheless, Cherumavilayi’s passion for translation exudes in his lifestyle. A life full of struggles Although born and brought up in Kannur, Shafi Cherumavilayi has had an illustrious life strewn halfway across the world, solely in the pursuit of a decent income.He hails from a low-income family, where literacy was a luxury. Cherumavilayi studied till 10th standard, after which he dropped out due to financial constraints.He left home at an early age to work in Pune and later moved to Bengaluru to work in the tea stall. Thereafter, he has been to the Gulf where for three years he worked as a construction labourer. Back to Bengaluru once again in 1997, Cherumavilayi found employment at a textile outlet. He stayed at this job for around a decade, which was when he mastered Tamil.

His first work was a Russian story written in Tamil, which he translated to Malayalam before he relocated to the Gulf. This later went on to be published in Janayugom, a Malayalam daily newspaper published by the Kerala State Committee of the Communist Party of India.A passion for translationIn 2008, once he was back in Bengaluru, Cherumavilayi came to know about celebrated Tamil author Thoppil Mohamed Meeran. He was deeply moved after reading his work and wrote a letter to Meeran expressing his desire to translate a collection of his short stories to Malayalam.Meeran gave his gracious nod, and Cherumavilayi translated Ananthasainam Colony to Malayalam, which later earned him the Nalli Thisai Ettum award.

“It was me who introduced Thoppil Mohamed Meeran to Malayalam,” Cherumavilayi asserts with pride.From 2011 onwards, Cherumavilayi has worked with the Kendra Sahitya Akademi at Trichy, Tamil Nadu has as one of their leading Malayalam translators. His first assignment with Sahitya Akademi was Sa Kandasamy’s novel Visaranai Commission which was published in Malayalam as ‘Annweshana Commission.’Among his other appreciated works, Cherumavilayi has translated Perumal Murugan’s ‘Ardhanaari,’ IPS officer G Thilakavathi’s ‘Kalmaram’ and Sahitya Akademi winner Melanmai Ponnusamy’s ‘Minsarapoo.’ Aside from translation, he has also penned a couple of short stories, which are mostly unpublished.

Source & Credit:https://www.thebetterindia.com/203911/kerala-construction-worker-writer-translates-tamil-to-malayalam-inspiring-india/
Posted by Rashmi Rimjhim at 4:00 AM