Inspirational:How a Karnataka Teacher Used a ‘Pencil’ To Breathe Life Into a Govt School! 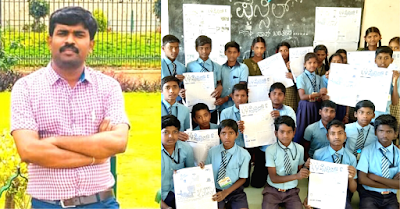 “I observed that the dropout rate was extremely high in the school and my first challenge was to change this. It did not help that the school had no infrastructure,” says Kotresh.

B Kotresh does not get bogged by adversities. When the 38-year-old joined Bellagurki Government School in his native village Belagurki in Sindhanur Taluk, Raichur, Karnataka, he knew students were disinterested in learning and found going to school a chore.He was also aware of the lack of infrastructure, the dilapidated school building, poor learning facilities and villagers’ apathy toward the school. Yet, the conscientious school teacher persevered.
And now, a decade later, the school has undergone a complete makeover with a new compound wall, good infrastructure, drinking water, clean toilets, a sports room, library and four new classrooms. All this has been made possible only because of the success of Pencil—his school magazine, says Kotresh.

The idea behind Pencil 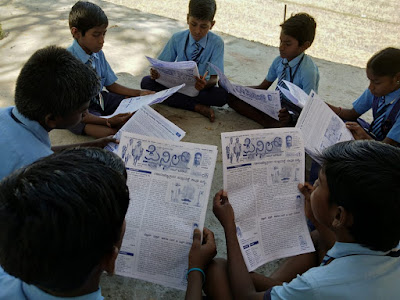 The children enjoying the newspaper.

“I observed that the dropout rate was extremely high in the school and my first challenge was to change this. It did not help that the school had no infrastructure,” says Kotresh.He did observe that the students seemed to enjoy art and drawing activities and thus, started engaging them in art and craft activities.In 2013, Kotresh decided to start a school magazine—Pencil. “The main reason was to get the students involved in something creative and make them feel accountable for it,” he informs.
He says that every month they publish a minimum of 500 copies, which is then distributed among the readers. “This costs me Rs 4000 each month and I have been putting this money in every month from my own pocket. For a year, I got a grant from the Indian Foundation of Arts and that helped,” he says.

Recollecting how they put together the first issue, Kotresh says, “There was so much enthusiasm amongst the students. I don’t think anything had held their fascination and attention for so long. They felt very proud of working on the magazine.”One section of Pencil gave the villagers a glimpse into what transpired in the school. “Initially, no villager wanted to step foot into the school and now they eagerly wait for the magazine to catch up on all that happens here,” says Kotresh.
Why is it unique?“While conventionally, teachers give their students homework, the work that I ask my students to do is very different – I urge them to observe traditions followed at their home, ask them to participate in village functions and events to see and understand first hand how things are done.”

These experiences and observations are then translated into words by the students for Pencil.
“This also trains them to be very sharp and observe the minute details around them. Over the last six years, I have seen a change in the way the students think and speak. There is confidence in them and that is my biggest achievement,” he says.


Pencil— Its Operation and Scope

“It was only when the Panchayat members read about the problems of the school that they realise they existed. Now parents come forward and pitch in whenever the need arises. Our participation levels have also increased manifold.”Speaking about how the villagers look forward to Pencil, Kotresh shares, “For many villagers, this is a way to see the art-work done by their children and they wait for it eagerly.”When asked how the students react, he says, “They are the happiest. They are not only meaningfully engaged but also feel that they have contributed to the betterment of their school. They have now taken ownership of Pencil.”“There was a time when these students did not want to come into school, today we have another problem – they do not want to leave,” says Kotresh who has finally achieved what he had set out to do.

If you wish to reach out to this amazing teacher and lend your support, please email him at kotreshbhavihalli@gmail.com

Source & Credit: https://www.thebetterindia.com/203678/karnataka-how-is-government-school-teacher-transforms-newspaper-pencil-inspiring-india/
Posted by Rashmi Rimjhim at 4:00 AM