Inspirational:This All-Women Rock Band Is Making India Better, One Song at a Time! 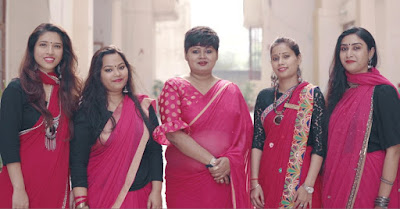 From the pressure cooker to the alarm clock, each morning begins with a concert for this unique group of women, who find beauty in the ordinary and create magical verses that are more than just melodious.
United by their passion for music and the need to speak up, these rockstars are a part of Meri Zindagi, India’s first all-female mission band.“We are a bunch of simple, middle-class women who juggle their ordinary lives with the extraordinary. We wake up early and finish our jamming session by 7.30 am, and move on with our jobs, housework or college. We sing, play and do household chores all at the same time, and we love our lives!” shares the lead singer-songwriter, Jaya Tiwari, who has a PhD in music and has been a radio jockey for over five years.

‘Dreaming ke pressure cooker ki seeti ko bajney do… Kajal chudi bindi jhumke payal se sajney doo.. Mere hausalon ke shankh naad bajney do bajney do bajney do…’A few lines from one of their songs which illustrate the daily lives of these and many more women.According to Jaya, all her songs draw inspiration from everyday lives—the whistle of the pressure cooker is a wake-up call to dreams, to get ready and face the world head-on.

Based out of Lucknow, this band is known for its unique approach to music, whereby their songs don’t just set fire to the stage, but also invoke meaningful discussions around social issues, especially those concerning women.Female infanticide, child marriage, girl-child education, domestic violence, and sexual harassment are some of the social issues that have found musical interpretation in Meri Zindagi’s songs..

“In Uttar Pradesh, one out of five girls is subjected to child marriage. Their dreams and ambitions decay and die after this. We wanted to portray issues like that in our songs. These issues need to come out of intellectual circles or big conference halls into the open, amid the common people. And, we are happy that we can do so, and that our audience values our lyrics and music.

With more than 70 songs, which include jingles for All India Radio, UP Mahila Police, CRS – Gurgaon Ki Awaz and Women Power Line 1090, Meri Zindagi has been successfully raising awareness.

They have also done more than 100 shows, both in rural and urban areas and have also initiated a few successful campaigns like ‘no sutta’ (anti-smoking), #humkaalehain (prejudice on colour) and #maaki (against derogatory female-centric slangs).But, despite the major focus on female-centric issues, the band is not limited by gender and also has a substantial male fan base as well.

“The issues we raise, affect not just women, but men as well. And that is why our band has so many male supporters. At the end of the day, gender equality is not about shifting oppression from one group to the other. It is about eliminating it,” she concludes.

Source &
Posted by Rashmi Rimjhim at 4:00 AM