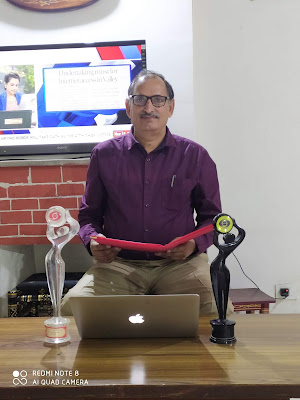 Sh. M S Duhan, DDG(E) of Doordarshan India, has been awarded with “Best Technical Article” by Asia Pacific Broadcasting Union(ABU), for his article titled “Anatomy of RF Amplifiers: Failure mechanics of RF Transistors” featured in ABU Technical Review’s ‘October-December 2018 issue’. Awards were announced during opening day of 56th ABU General assembly being held at Tokyo Japan on 17th Nov 2019. It is an honour for Sh. Duhan and the organisation to be among the very few winners in this year’s biggest event for broadcasting, encompassing the luminous Engineers and researchers from 57 countries including China, Japan, South Korea, Australia etc.

“I have received a few honourable mentions & prestigious awards over the past years, but winning third time International awards, is an inexplicable & delectable achievement for the country”, said beaming Duhan. The award will be presented on 21st November 2019 in a gala function of ABU Awards night to be held at Tokyo and it will be received by Smt. Anuradha Agarwal, ADG(Tech), Prasar Bharati, on his behalf. Beside 400 Dollar cash, the award carries a citation. These awards are given to the best technical work and articles on broadcasting arena. Earlier, Sh. Duhan had won ABU Awards, during the years 2015 and 2017 for his significant works on digitalisation of terrestrial network of Doordarshan, besides being winner of several DD Awards.

In the history of AIR & Doordarshan, it is first time that an Engineer has won 3 international awards for Technical papers.
Posted by PB Pariwar at 7:00 AM