Police Inspector met with a serious accident, not only rejoined but doing several work for poor students,visited AIR Jalandhar 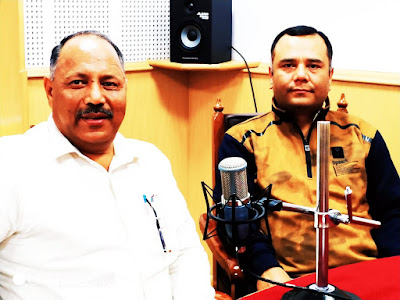 Mr.Ram Dayal is a police inspector in Chandigarh. He  met with a serious train accident in Germany in the year 2000  during his participation in UNO peace keeping mission in Kosovo. This left him with broken jaw, both the legs amputated and various other injuries. But he overcome this serious incident of his life with his courage and determination. He not only rejoined police force but  also has been doing social service for poor students through various means.

He drove himself all the way from Chandigarh to All India Radio Jalandhar for a recording of Salam Zindagi programme which will be broadcast on 8th December at 7.40 pm over regional channel 873 kilo hertz and AIR Punjabi channel of DTH.

Contributed by: Shri Amandev Joshi
Posted by Rashmi Rimjhim at 4:00 AM