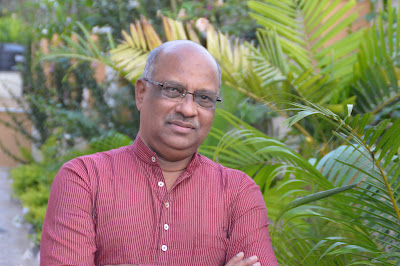 Dr. B. C. Sadar, Former Station Director, AIR Bengaluru and a noted Kannada writer has been awarded with the prestigious “KAVYANANDA AWARD - 2018” for his research work in Vachana Literature, entitled “VARTAMANAKKU VACHANA”. This award has been constituted by the Kannada Sahitya Sanvardhaka trust Bengaluru, in the memory of the late Dr.Siddhayya Puranik, who was an IAS officer and a well known poet - critic in Kannada.
This award carries Rs. 50,000/- cash and a citation. The award is being presented on 27th December 2019, in a prestigious function, to be held at Kannada Sahitya Parishat Sabhabhavana, Bengaluru.
Apart from his research works in Vachana literature, Dr. B.C. Sadar, is also a poet and a short story writer. He has published two poetic collections entitled “SISIPHASSARA SUTTU” and “BUDDHANA BHIKSHA PATRE”. His short story collection “TAPDANDA” has been honoured with Karnataka Sahitya Akademi award in 2002. This has been translated in Hindi by Prof. Dharanendra Kurkuri with the title “JURMANA” and has been published by Aman Prakashana Kanpur. His Ph.D. thesis entitled “Basavaraj Kattimaniyavara Kadambarigalu” has been published in 2002 and now it is under its third edition. He has also published 12 valuable books in Kannada, consisting of essays, criticism, columns and research in Vachana Literature etc.
His main contribution to Kannada literarary field is publication of broadcast literature in the form of books. He has edited and published more than 11 Books, consisting of broadcast literature with the help of outside literary organisations like Sahitya Akademi, Kannada Sahitya Parishat and so on.
He has many awards to his credit, including Karnataka Sahitya Akademi Award, Akashavani Annual Award, Goruru Prashasti, Jayteertha Rajapurohit Award and Gold medal, Vishweshvarayya International Award, Bharatisuta Award, Prof S.S. Malawad Award. His short stories have won many awards in various prestigious competitions.
He has translated 11 short stories of well known writers of various Indian languages and an anthology of all these short stories is being published by the prestigious Navakarnataka Publications shortly with the title “CHINAR VRIKSHADA ALU”.
He is a rank holder and gold medalist in Post graduation and Diploma in Basava Studies. He served All India Radio for more than 31 years in various capacities as Programme Executive to Station Director, including in charge SD of SR-II. He retired from AIR Bengaluru in July 2015. He now resides in Bengaluru pursuing his literary interests. He can be contacted at bcsadar@gmail.com or 09886985847.