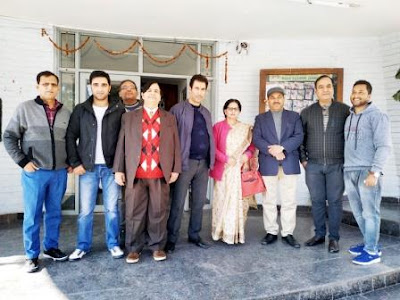 The Regional News Unit of All India Radio Jammu  celebrated its 49th foundation day.The strategically important News Unit was set up in 1971 to counter the malicious propaganda dished out by Radio Pakistan and to make people aware about the ground realities about 1971 Indo-Pak war.  The News Unit has become a household name in Jammu, providing people with authentic news and its analysis.

On its foundation day today, the News Unit broadcast a one hour special live phone -in- programme in which former celebrated News Readers Narendra Bhasin and Chanchal Bhasin and Head of the News Unit, Ramesh Kumar Raina interacted with callers and shared their experiences. The callers hugely appreciated the contribution of the News Unit and its growth in the last five decades in the promotion of local culture and providing people with credible and timely news and information.Complementing the News Unit, Advisor K K Sharma said, “It has tremendously contributed in the growth and development of Jammu and Kashmir and is countering fake news and propaganda from across the border by presenting authentic news and its analysis. He further said that the News Unit has helped a great deal in promoting welfare and developmental initiatives of the Government in the last five decades.

The Principal Director General of News, All India Radio New Delhi, Ira Joshi complimented the News Unit for playing a vital role in countering Anti-India propaganda from across the border and reaching out to every corner of the erstwhile J&K state with facts and news.Started with a Dogri bulletin, the Jammu News Unit of AIR has made rapid strides in reaching out to people with credible news and information and at present, five News Bulletins including three in Dogri and two in Gojri language are broadcast on daily basis. Apart from daily news, counter propaganda commentary, FM Headlines and various other current affairs programmes based on current affairs and social issues are also being produced by the News Unit on daily basis.