Inspirational:Thrown out of Home At 11, This Dancer Is the First Transwoman to Receive Padma Shri 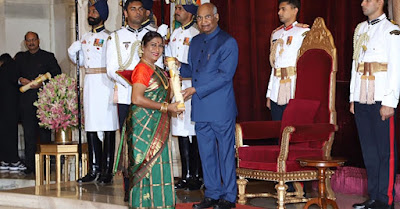 Padma Shri recipient, Narthaki Nataraj’s inspiring journey is nothing short of a cinematic thriller, with its ups and downs. It is even featured in the Tamil Nadu government’s 11th standard textbook.

“Oh friend, why is your face sweating profusely like this?” enquires the Nayaki (heroine) from her Sakhi, gracefully moving her hands on her face. Sakhi blames the sun, pointing her hands toward the sky. “Oh Sakhi, why does your hair, as beautiful as dark clouds, look untidy?” the curious friend persists. “It’s because of the fresh gentle breeze,” quipped Sakhi. Not one to give up easily, the Nayika pesters her Sakhi with innumerable questions. The audience is in thrall of the evocative performance by Padma Shri recipient, Dr Narthaki Natraj.By enacting the roles of both the friend and heroine, she effortlessly emotes varied emotions like joy, anticipation and curiosity not only on stage but also in the people in the auditorium.

Narthaki’s child-like smile, expressive eyes, contagious laughter and flawless execution of different mudras make for perfect ingredients required to perform the Indian classical dance—Bharatnatyam.
“Shringara Padams and Jaavalis are my favourite dance compositions. It showcases the Nayaka-Nayaki bhava and has a lot of scope for the expression of feminism,” Narthaki, a renowned Bharatnatyam dancer and Padma Shri recipient.

Thrown out from her home at the age of 11, Narthaki is the first transwoman to have received India’s fourth-highest civilian award.“The award has been given for my merit as a Bharatnatyam artist. All the negativity has transformed into a great victory. After receiving the award I have been quite busy. Now people who are not familiar with the field of music or dance also recognise me,” smiles the 55-year-old.Narthaki’s life is nothing short of a movie story, with its many ups and downs.

Honoured with many awards including Sangeet Natak Akademi Award (2011) and the Kalaimamani Award (2007), this Bharatnatyam doyen two dancing schools, Narthaki Nrutya Kalalayam in Madurai and Velliambalam Trust School of dance in Chennai. Besides teaching students from across the world, the two academies also serve as a platform that promotes children from underprivileged backgrounds who have an artistic leaning. 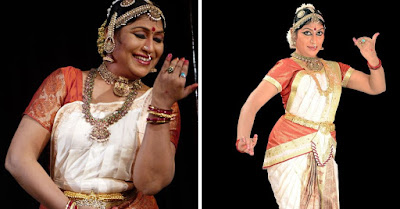 Narthaki was born in a well-to-do Tamil family in Madurai who assigned her the male gender. It wasn’t until she turned 10, did Narthaki realise that she was born in the wrong body.Naturally, a 10-year-old’s confession was met with denial followed by a constant badgering to behave in a certain manner. Ordered to walk like a man, talk in a heavy voice and forced to play outdoor games with boys, the family took every step that conformed to societal norms of gender.

“I never had a childhood. It was sheer struggle and rejection. We were “born with a silver spoon” but not meant to own it easily. My parents were shocked, unhappy, worried and angry when I came out to them. Every time someone said I need to be like other boys, I did not feel right. It was like being told not to breathe through the nose or see through eyes. Basically, not be me,” she recalls.Amidst all the confusion, pestering, bullying and mockery, Narthaki sought solace in dance. Her first exposure to the classical dance was at a very early age through the window of cinema.

The 3-year-old would be mesmerised by legendary actress and dancer Vyjayanthimala Bali’s lasya (a graceful dance from expressing happiness). Like every child, Narthaki too would pose in front of the mirror and enact her favourite actor and replicate her dance moves.“Back in those days, filmmakers would include a lot of classical dance in the films. I am a huge fan of Vyjayanthimala Bali. More than her dialogues, it was her flawless expressions through dance that bowled me over,” recalls Narthaki.

Since Bharatnatyam was predominantly considered to be a feminine dance form, there was opposition from parents once again, “They were at a point where they felt disowning me would be the best option. I was thrown out from the house when I was just 11.”When the whole world was against her, it was Shakthi, her best friend, who stood beside her like a rock.

“I am glad I had someone like Shakthi who never gave up on me. We faced all our struggles together and she has been my constant since then. We did odd jobs and had days when we could not even afford one single meal. We stayed at places of our well-wishers who were ready to accommodate us. We performed Bharatanatyam to old cinema music at small functions and temples where they would pay us. With that money, we somehow managed to take care of ourselves and finished our schooling,” says Narthaki.

By performing with local troupes in temples and functions, Narthaki got to know about Kittappa Pillai, a scion of the famous Tanjore Quartet (a Bharatnatyam format). Incidentally, he was Vyjayanthimala’s guru.“Kittappa Pillai had just received the Isai Perarignar Award and I knew from magazines that he was then at Thanjavur after returning from his travels abroad. So, we rushed off to Thanjavur to become his students, which was easier said than done. Becoming his student is nothing short of a miracle,” reminisces Narthaki.It was in the 80s when she reached out to Pillai. To her surprise, Pillai had heard of a young child wanting to carve her own niche in Bharatnatyam.

Pillai invited Narthaki to attend Vyjayanthimala’s performance in Bengaluru which further led to several invites to performances in different parts of Southern India.Invitations continued for a year without Pillai even once mentioning about teaching Narthaki. Travelling to different regions and buying tickets to performances took a serious financial toll on Narthaki but her hope never diminished.“Come tomorrow. We will start the class. These words of guruji were music to my ears and I rushed back to Madurai from Chennai on the same day. I took some fruits and flowers as ‘guru dakshina’ and thus began the best and unforgettable phase of my life,” she shares.

“You being a male or female or third gender is natural. You can’t change it. You don’t have to. It is your inner soul that you have to identify with. Only that matters and self-trust and confidence is all it takes to achieve success,” Narthaki signs off.

Posted by Rashmi Rimjhim at 4:30 AM