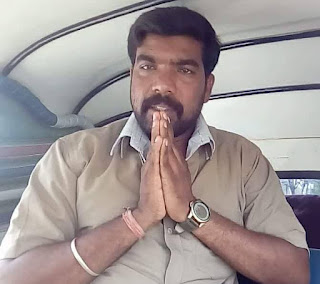 If you ever tuned into Radio Active, Bengaluru, during your long commutes, you were sure to catch Radio Jockey (RJ) Shivakumar hosting a unique show, in which he would go around the city, interviewing auto drivers.What problems does a common auto driver face? What do they eat for lunch when they are several kilometres away from their home? Why are the fares surging? Shivakumar’s candid conversations brought forward a never-heard-before perspective.

What made auto drivers open up to this RJ so easily? For one, Shivakumar also drove an auto for a living—he was only a part-time RJ with Radio Active. He also ran the Gurukul Seva Trust in Bengaluru to help underprivileged students.A man donning many hats, Shivakumar (fondly known as Auto Shivu) was a popular personality in the city. Unfortunately, on May 22, he succumbed to cancer at the age of 54.

Here’s why he meant so much to so many people in Bengaluru.
A Bengaluru Auto-Driver who Stood Out:Shiv Kumar (left) interviewing an auto driver

Shivakumar had decided to pursue auto-driving as an occupation after being inspired by the 1980 Kannada film, Auto Nag. Much like any hero of a film, he went on to embody a kind, generous and charismatic personality to make his passengers’ ride smooth.There are many reasons why he stood out—and the first was quite literal. In the crowd of black hooded autos, his was brightly coloured, with photos of eminent writers, social workers, freedom fighters.

In his vehicle, he also had a first-aid kit and a library ready for the perusal of his passengers. Honest in his work and generous in the fares he quotes, Auto-Shivu was known to give discounts to senior citizens, students and the kin of army personnel. He would go out of his way to return lost or forgotten belongings to his passengers. So well known he was in Bengaluru that he bagged 31 awards, mostly from the city police.In an interview with The Hindu in 2015, he has said, “My passengers have made me famous. I sometimes feel like Aamir Khan or Salman Khan just by the way people treat me,” adding humbly that what he did was merely his duty.

In his career spanning over two decades, Auto Shivu must have met thousands of people and with every ride, had a different experience. He had mentioned that on one occasion, he had saved an accident victim’s life and on another, a woman delivered a baby in his auto.
An RJ, an auto-driver and a philanthropist:
Source & Credit:https://www.thebetterindia.com/?p=228008/

Auto drivers in Bengaluru are known to be distinctly unfriendly, but perhaps because he was one of them, and also knew how to ask the right questions, he would engage them in deep conversations about the most varied topics. Chances were, you would listen to a spirited conversation between him and another auto-driver, while sitting in one!One would think that someone who drives around Bengaluru for work 12+ hours a day and works as an RJ twice a week would be tired to do anything else. Not Shivakumar.

He started an initiative, called the Gurukul Seva Trust, to help underprivileged students with books and uniforms. A class 8 dropout himself, he understood the importance of education and didn’t want marginalised students to miss out because of their financial troubles.The man firmly believed that a teacher must always be ready to teach and in turn, the student must respect the guru. “To spread this message, I have written short poems and printed posters that talk of the teacher-student relationship. I have distributed posters to over 1,500 government and private schools,” he had told the New Indian Express.

From the money collected in these initiatives, Shivakumar would donate books and uniforms to the needy students. By 2018, he would donate these essentials worth Rs 1 lakh every year!

His untimely death is a blow to his fans. Shivakumar will be deeply missed by his loyal listeners, the students he helped and by other auto-drivers in Bengaluru.