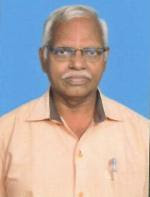 Shri B Sundararajan joined All India Radio on 25.02.1983 as Engineering Assistant at Hyderabad. There, he performed shift duties at Studio and Transmitters for 02 years. Later on, he got transferred to AIR, Chennai in the same capacity. At Chennai, he looked after shift duties mainly at FM Transmitter. He gained good knowledge in FM Transmitter. His notable performance at AIR, Chennai is that he rectified an Ionospheric Equipment which was faulty for a very long period.
On promotion as Senior Engineering Assistant he was transferred to DDK, Chennai in the year 1989 where he was entrusted with the assignment of attending to FM Transmitter. During his tenure at DDK, Chennai he had conducted a practical session on ‘ Tuning of TV Transmitter, Antenna and Feederline Testing for the entire South Zone.
Also, he involved in tuning of TVROs for ARABSAT in LPTVs of Tamil Nadu. Later, he was transferred to LPTV, Tindivanam and then to LPTV, Vaniyambadi and then again back to DDK, Chennai in the same capacity.
Later on, he was promoted as Assistant Engineer and posted to O/o The ADG(E-SZ), Chennai in the year 2000. Here, he was put in Project Section under which he carried out the installation of LPTV, Machilipattinam and then he was put in Purchase Section where he purchased complete materials for 42 LPTVs in 01 year time.
Then, he was transferred to LPTV, Arni where he installed self-supporting Mast. Then he was transferred back to O/o The ADG(E-SZ), Chennai where he allotted the portfolio of Stores initially and then in Purchase Section where he purchased materials for HPTV. Then, he was transferred to LPTV, Vandavasi, then to AIR, Karaikal where he was the Engineering Head and looked after complete engineering activities.
Finally, he was posted to AIR, Chennai in the year 2018 and he has been discharging his duties till date with sincerity and dedication. A very sincere and dedicated staff retiring from service after successfully completing nearly 37 years of service. It is really a greatest achievement.