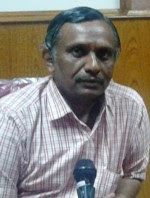 Shri R Rajagopal was selected as Farm Radio Reporter for Farm & Home Unit of All India Radio Chennai in 1987 with a noble intention to serve farmers for transfer of technology from the lab to land and to educate the farming and rural community about the new technologies in the field of Agriculture and allied subjects. Microphone and Sonifex recorder have become a part of his attire. Programmes directly involving the farmers from the field are often refreshingly honest and come as a reprieve for even urban listeners.

UZAVARGALUKKANA SEIDHIGAL :
He is the first source of information linked to livelihood to the farmers of Seven districts every morning from 6.35 am for 30 years (Thirty Years) and they are following the new Scientific methods of cultivation advocated in the morning farm broadcast and able to achieve success in their farming operation.

REVENUE GENERATING SPONSORSHIP PROGRAMME :
From 2002 onwards he has been producing 52 weeks serial sponsorship programmes in Co-ordination with Central and State Government Departments, Nationalised Banks, Fertiliser & Pesticides Firms and other Public and Private Sector undertakings. Owing to his untiring and single handed efforts, so far, the All India Radio, Chennai has earned of Rs. Rs.6,96,56,402/- ( Rupees Six Crores Ninety six Lakhs Fifty six Thousand Four hundred and Two only) through these sponsorship programmes and that too without compromising the basic objectives of catering to the needs of the Farms through Public Service Broadcasting
Apart from the regular sponsorship of programmes broadcast all through the week from 7.30 to 8 pm every day, he has also procured commercial spots for ‘ Mann Ki Baat’ Hon’ble Prime Minister’s Manathin Kural Tamil Version Programme which has Fetched a revenue of Rs.20,46,425/- (Rupees Twenty lakhs Forty Six Thousand Four Hundred and Twenty Five only). This is a notable achievement on his part which is a proof of his devotion to the Service. Further, he has taken this special task with an eye to make an outstanding Contribution towards augmenting additional revenue for Prasar Bharati.
So far he has conducted more than 125 Farming Classes over All India Radio for the benefit of the Farming Community which have, undoubtedly, helped Farmers in increasing their food production growth tremendously. Farm School on AIR broadcast is a good example of unpretentious mass media programmes that are useful sans fills, it is specific and tailored for the farmers in earmarked areas.

AKASHWANI ANNUAL AWARD :
He has received First Prize in Akashwani Annual Award 2007 in the category of Farm & Home “ Aaraaichi Puratchi” (Research Revolution) ‘Muha;r;rp Gul;rp’. This is a historic achievement and the first time of Chennai Farm & Home broadcast received this First Prize National Award for the Tamil Farm & Home programme.

BEST SERVICE RECOGNITION AWARD :
He has received “ Best Service Recognition Award ” 1999-2000 at Tamil Nadu Agriculture University Coimbatore on 27th December 2000. Eminent Scientist Dr. M. S. Swaminathan presented the award to him for having done yeoman service to the Farming Community which brought about a collective and Cohesive change in the lives of rural population by enhancing their quality of life.

FOLK MEGA PROJECT :
So far he has recorded 577 tribal folk songs at Elagiri hills, Javvadhu hills Chitteri hils and DhenKanikkottai for Folk Mega Project. With a view to capture this abundant traditional culture, he toured extensively in these hill areas for about 3 months recording folk rendered by tribal people with intimate knowledge of the rich tradition. He had to travel for over three hours in hills and tribal areas for authentic unique recordings of folk lore. Post production of this Sanskar Geet (English translation & notation and Hindi translation & notation and Tamil notation) was indeed a herculean task This has given him immense pleasure as he could place it on record the beauty of folk songs for our future generations. This will speak volumes of his devotion to duty.

FLAGSHIP PROGRAMMES :
Central Government Flagship programmes, schemes and State Government Welfare schemes are meticulously planned, produced by him and regularly broadcast with a view to create awareness among the people about policies & plans undertaken by Central and State Government for the Welfare of the rural people. He produces these programmes in an imaginative.
Last but not the least, to quote from his own his words - “ Even though I am retiring from my service, I would ever continue the spirit of this committed service with the objectives of Public Service broadcasting for fostering knowledge connectivity up to the last mile and last person, to bring about smiles and cheers in the faces of our rural population” . - What a commitment he has got even after his retirement, a laudable pledge.
The All India Radio in general and AIR, Chennai in particular salute this great man who sacrificed his Career for the Farming Community. The All India Radio will never forget his contribution and achievement. A very sincere and dedicated staff retiring from service after successfully completing nearly 33 years of service. It is really a greatest achievement.