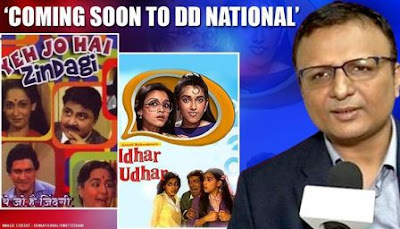 Shashi Shekhar, CEO Prasar Bharati (Doordarshan & All India Radio) India's Public Broadcaster, took to his Twitter handle on Wednesday evening to reveal that 1984 popular serial Yeh Jo Hai Zindagi and 1985 serial Idhar Udhar will be coming soon to DD National. Replying to a fan who requested to retrieve a few old serials, Shashi Shekhar confirmed that they will be retelecasted soon.

Another fan asked him if he was planning on releasing new shows to change the current 'Saas-Bahu' scenario on other channels and responding to him Shekhar said, "Stay tuned - We will be premiering around 40 new shows over the next few weeks across multiple DD channels - a combination of historical dramas, thrillers, reality shows, and soaps."

Doordarshan began as an experiment on September 15, 1959, and became a service in 1965, which beamed signals to reach television sets in living rooms in and around the national capital.