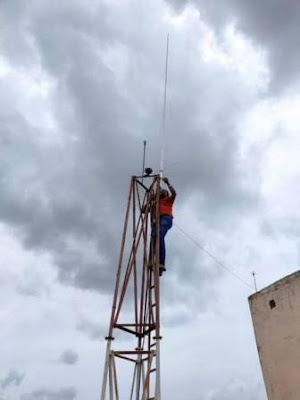 Amateur radio operators worked hand in hand with the Odisha Disaster Rapid Action Force (ODRAF) ahead of the cyclone.

Emboldened by their recent experience in Balasore district of Odisha during Cyclone Amphan, radio amateurs are confident of providing communication support to the administration in all coastal districts in times of natural calamities. “Amphan tested what we had learnt from a simulation of a real-life situation during calamity on an uninhabited island without power and conventional telecommunication in Chilika Lake in 2019 and 2020,” said Gurudatta Panda, a member of the Amateur Radio Society of Odisha (ARSO). Amateur radio operators worked hand in hand with the Odisha Disaster Rapid Action Force (ODRAF) deployed in Balasore district ahead of Cyclone Amphan. Anticipating a situation similar to the one caused by Cyclone Fani in 2019, the Special Relief Commissioner (SRC) requested the ARSO for support. A group of ARSO members had accompanied the ODRAF team to Balasore.

The distance of 176 km between Balasore and the capital Bhubaneswar made Very High Frequency (VHF) communication difficult. So, High Frequency or Short Wave was used by radio amateurs to establish a parallel mode of communication in case of any extreme need. They overcame the problem of lack of an antenna tower by rigging up an antenna strung from a tree to a wooden bench. “All this was done within 30 minutes, much before Amphan crossed the Balasore coast. It facilitated communication with the headquarters of the Odisha State Disaster Management Authority (OSDMA) in Bhubaneswar, where two ARSO members monitored this emergency communication facility...,” Mr. Panda said. But the conventional communication infrastructure survived the impact of Amphan in Balasore and no official communication had to be made on amateur radio.

Two radio amateurs, Mr. Panda and Muksh Kumar Pradhan, were in Balasore, supported by local volunteer Dibyajyoti Jena. Four other radio amateurs — Umakant Swain, Rajesh Kumar, Chadrasekhar Patnaik and Rajanikant Mishra — were part of the Bhubaneswar team. According to ARSO members, Debasish Mishra of Puri, who got his call sign after Fani, was also ready to help. When Fani struck, there was no radio amateur in Puri. The preparedness and speed with which ARSO members built an emergency communication link was praised by the SRC, the Chief General Manager of the OSDMA and the Balasore Collector.