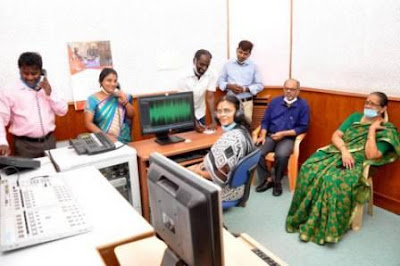 While many people were making their peace with the restrictions of lockdown, 46-year-old Sophiya was giving up hope. A myeloma patient undergoing treatment at JIPMER Puducherry, she had missed her month-end check-up in March, stuck as she was at home in Madurai. She was grappling with body pain and high fever. A friend suggested her to tune in to All India Radio's Madurai FM Rainbow at 5 pm. This was usually the slot for the broadcast of the favourite film song programme Sevvanth Maalai , but now doctors gave free telephone consultation from the radio station.
The evening Sophiya tuned in, an oncologist from Meenakshi Mission Hospital & Research Centre was in the studio. Sophiya shared her health condition with the doctor breaking down as she spoke of her pain and fear. Dr. Krishna Kumar Ratnam comforted her, asked her questions about the tests she had undergone and what medicines she took, then advised her to call for an ambulance on 102. He also spoke to her doctor in JIPMER. The conversation calmed Sophiya down and gave her the confidence and courage to do what she had to do. The next morning she was at Government Rajaji Hospital under medical care of oncologists there.
That evening, 17 more cancer patients called in, taking the programme beyond its scheduled 60 minutes. "We had to resume the session after the five-minute daily news bulletin from Chennai," says Savitraa Rajaram, the Programme Executive whose idea it was to have the interface between doctors and patients. "I heard about non-COVID patients suffering due to closure of private clinics and hospitals and arranged this free counselling for them from our studios. "On most days, we overshot the one-hour slot as there were so many anxious callers waiting to reach out to a doctor.”
Rajaram along with a team of casual announcers Divya Krishnaswamy, S M Muthukrishnan, A Jayachandra, S Shakthi Saravana Kumar and P Nithya Senthil volunteered to work on the special live programme in public interest from March 29 to May 31. Each evening, a doctor from a specific field was invited to the studio to take questions from listeners and advise them accordingly. Medicos from departments of psychiatry, general medicine, emergency and trauma services, ophthalmology, neurology, paediatrics, nephrology, everybody willingly gave their time.
According to Rajaram, AIR Madurai is perhaps the only station in the country to air this kind of a marathon live health programme that ran for nine consecutive weeks. "It turned into a social service," he says.

"With each passing day, we realised how the programme was benefitting so many sick people in dire need of help,” says Assistant Director (Programme) M Jothimani Ilangovan. From dialysis to cardiac patients, pregnant women and new mothers, they were stressed about emergencies at home and how to handle them with all the restrictions on travelling. Two days before the launch of this COVID-19 Health Awareness Programme, there were repeated announcements on the radio and AIR Madurai's social media handles giving the phone numbers for the listeners to call on. The invited doctor's name for the evening interface was given out each morning
It was not an easy task to line up leading doctors of the city for free telephone consultation, says Rajaram. “Handling so many callers, filtering the genuine calls and following up on help wherever possible was quite a task,” he says. Rajaram says, the team is taking a short break this week and will resume the programme soon. He has led another successful series broadcast daily at noon during the same period, from lockdown 1.0 to 4.0. In this hour-long programme, Divya Krishnaswamy did two phone interviews, one with doctors and the other with sanitation workers, ward boys, nurses, ambulance drivers, police personnel, bureaucrats and politicians. The programme clarified doubts, provided relevant information and gave the Covid frontline workers a chance to speak about the challenges they faced and how still they remained motivated.
"Many were in tears as they spoke on the radio as it was their first such opportunity. It was also a moment of pride for them as they had never imagined getting such a platform," says Divya. Having officials like the ACP on the programme helped things get sorted out almost instantly. One listener spoke of how he was unable to go buy medicines. The ACP explained how a person was allowed to go out if he or she had a prescription. She issued immediate instructions from the studio to patrolling staff on walkie-talkie asking them to help people. "Our idea was to reach out to as many people as possible. Especially to those with no means who needed guidance," says Divya, "and we are glad that we could make a difference.”

Source and Credit :- https://www.thehindu.com/society/medical-specialists-gave-free-consultation-to-non-covid-patients-in-and-around-the-district-in-a-64-day-live-series/article31785855.ece
Forwarded by :- Shri. Alokesh Gupta
alokeshgupta@gmail.com
Posted by PRASAD KARADKAR at 6:00 AM