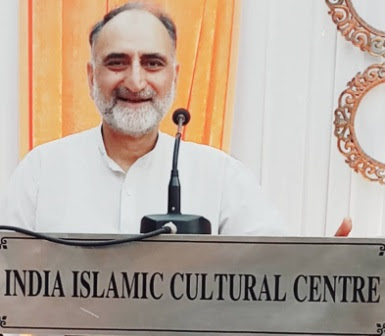 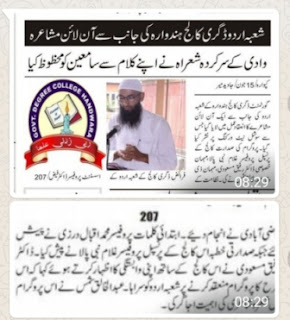 Organised by the Urdu department of the college had more then 20 renowned poets of the state on-line from 1130 Hrs to 1600 Hrs kept listeners in Facebook,Twitter and WhatsApp groups spell bound.Poets drawn across the state had choice either to recite in Kashmiri or Urdu felt the pulse and mood of their listeners and viewers thus preferred Kashmiri.

Masoodi in his extremely well worded address said....we are all pots,no listeners,no critics and no readers.Making this point further stringent Dr.Masoodi said it is the most tragedy and most dangerous trend of any literature n language that its writers do not allow critics to flourish. He said critics are THE MOST HATED people in literature as none wants to see his creative analylised and evaluated on literary trends and scales thus discouraging prose writing and encouraging only and only poetry which can prove fatal for any literary movement of any language. Dr.Masoodi also cautioned that our established should encourage second line and provide platform to neo-writers to carry forward their set trends in form and style which is unfortunately is not seen commonly but with exceptions.

Principal of the college Dr.GN Bala alongwith AK Shams were in on-line presidium with Dr.Masoodi and ably conducted by AP of Urdu Dr. Faiz Qazi Abadi. poets who presented there poems were khaliq Shams,yousuf Mashoor,rashid jawhar,shabnam gulzar, hassanazhar,tariq Ahmad taruq,tej sagar, fayiq maqbool,hassan darvesh,gulzar jafar,faiz qaziabadi,Hasan' tawhidi, and many more.
People at large appreciated the efforts of college administration and staff for having organised such a grand function.