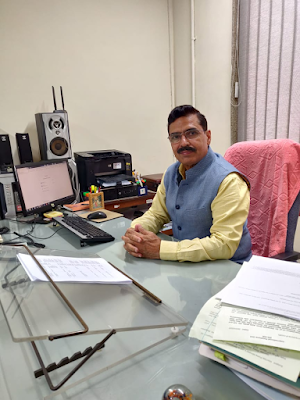 We are in the business of words, the spoken words…yet the words falter, they wish to remain unspoken … every time one bids adieu to a wonderful colleague.

“Is he retiring already?” exclaimed a senior when we informed him about today’s farewell meet. “I thought he had years to go!!!”

You would say the same about Y P Singh, ADP (International Relations) if you met him in the corridors of Akashvani Bhawan. Trying to write a farewell post for Yash Pal Singh, universally known as Y P, one has to take refuge in the words of Bob Dylan as he wrote his iconic song, Forever Young.

“May God bless and keep you always,
May your wishes all come true,
May you always do for others
And let others do for you.
May you build a ladder to the stars
And climb on every rung,
May you stay forever young…”

Y P Singh cut his broadcasting teeth at the News Services Division (NSD) in Delhi which he joined on 23 January 1988 as a Transmission Executive. He spent 14 years at NSD till his promotion as Pex when he was moved out to Suratgarh. If you catch him at his fleeting relaxed moments you would get to know about those exciting and challenging 14 years. It will be worth your while to hear those stories. Perhaps he will tell you a Kargil tale or of the impossible trek during that Uttarakhand landslide in 1998 that claimed the lives of 60 pilgrims including Protima Bedi. And if you get really lucky, you will get to hear of the tapes that nearly got lost or the Prime Minister who had a special smile for a young and earnest YP.

He may not tell you this but he has many firsts to his credit at NSD like the insertion of live voice casts in news bulletins, use of signature tunes for news bulletins and news-based programmes, start of news-on-phone…and many more. When the new format news bulletins rolled out in 1995, it was Y P Singh who created the double gong sound effect that separated two news items. Using the Hotwire audio editing software developed by our R & D engineers and the single gong sound extracted from those UN tapes you may remember DT&PES playing. Painstaking could stand for his second initial.

If you are one of the 38-odd International awardees during his 17-year tenure in the International Relations (IR) Unit, you would know the personal efforts he put in, way beyond office responsibilities, to ensure you got an accolade, India got an accolade. That your trip was smooth and comfortable. You forgot he was not a Protocol Officer.

I particularly remember Y P Singh advising M Balakrishnan Menon, a colleague from Kerala, to take off for the airport for an international training programme while he (Y P) spent his weekend getting the required signature of the Minister concerned on file that hadn’t happened by 6 pm on Friday.

I have come upon him pouring over poorly translated scripts and inadequate synopses that would hamper an otherwise good programme from making the cut at an international competition. For hours. Time he did not have.

The five years he was my colleague in the Directorate General, one could find him working till 8 pm every evening before he caught the train to Ghaziabad.

One could always count on him for support, guidance, a kind word, a warm smile, a coffee offered with love. Always the personal touch. Always straight from the heart. Whether as team leader for AIR’s troupes of young Indian artistes to the Grand Finales of the second, third and fourth ABU Radio Song Festivals abroad . Or while taking a colleague from the hinterlands through the ropes of official foreign trips. Or hovering alert and helpful in the background while the many AIBD & ABU In-country Training Workshops that he coordinated painstakingly, took off for AIR and DD Programme officials in India.

I worked with him on Mann Ki Baat duty as part of the social media team during the first term of the Hon’ble Prime Minister. Those otherwise tense Sundays were made comfortable because one knew that long before one reached office, Y P Sir would be there getting his office room prepared to welcome us, temperature controlled ( with heaters blazing or ACs humming) printouts of script ready for every member of the team along with a smile and a cup of coffee.

I knew he held a Master’s degree in Botany from Allahabad University but I wasn’t aware till an hour ago that he has a diploma in French language as well.

I have never seen him lose his cool under immense pressure. And yes, I have watched him in high octane times. From the sidelines, while he was part of the small core unit that organized several successful international events hosted by India like the General Conference of the Commonwealth Broadcasting Association in 2006; ABU’S Radio Asia Conference 2010 & 2011; ABU General Assembly 2011, 21ST ABU Copyright Meetings 2015 and the Asia Media Summit 2018.

We are in the business of words. But words elude me today. There’s only so much words can say. Let me fall back once again on that song then, by Bob Dylan, which will help us wish Y P Singh for the next rung he climbs on his ladder to the stars: