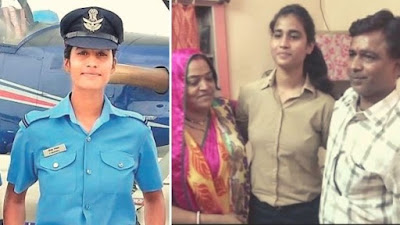 A 23-year-old Aanchal Gangwal graduated from the Indian Air Force Academy on Saturday. Her teary-eyed father watched his flying officer daughter in uniform on TV, bagging the President’s Plaque at the combined graduation parade held at the Air Force Academy in Hyderabad. Aanchal comes from a humble background. Her father Suresh Gangwal owns a small tea stall at Neemuch district of Madhya Pradesh.
She was awarded the Plaque alongside 123 flight cadets who were commissioned as officers of the Indian Air Force (IAF).


Dreaming of this day since she was a kid

Aanchal credits her father for the hard work he’s been putting in for his entire life to ensure that his children (two daughters and one son) achieve what they dreamt of. The 23-year-old said that she always wanted to join the defence forces.Unfortunately, Aanchal’s parents couldn’t join her in the ceremony due to the travelling restrictions but they were in tears after watching their daughter’s graduation ceremony on TV. “I used to dream of this day almost every night. To stand in my uniform, in front of my father and mother, who have fought all the difficulties in their lives to get me here.After graduating from a government degree college in Neemuch in Computer Science, Aanchal joined the Madhya Pradesh police department as a Sub-Inspector. Later, she quit the job after being into merit as Labour Inspector. “I worked there for eight months before joining the forces,”.Soon after graduation, she also appeared for AFCAT and got recommended in SSB in her sixth attempt. “When I told my parents that I want to be in defence, they were a little worried like any parent. But they never tried to stop me. In fact, they have always been the pillars of my life.”An elated Aanchal added, “I am always ready to serve my motherland and see this as an opportunity to do so.”
Source:shethepeople.tv
Posted by Rashmi Rimjhim at 4:00 AM