Inspirational: NRI Gives Back to His Roots, Educates 2 Lakh Kids While Living in USA! 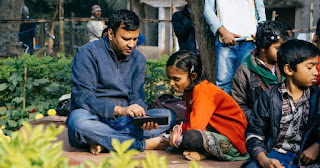 Biswajit Nayak, is a Non-Resident Indian (NRI) and is all too familiar with the diasporic conundrum of straddling two worlds (and cultures) at the same time.

“Many of us living away from the country, dwell in the midst of two worlds—one that we currently inhabit and another that we want to be in. There is always this sense of moving away from the current place to the other. As a boy from a village, I always wanted to leave to go out into the city and then out of the country. Now, a part of me yearns to go back and do something for my village, my home,” he begins.

But, unlike many, the California-based NRI decided that he would not let this yearning be limited to just a feeling. He took the extra step and decided to act upon it, almost 6 years ago, by starting a small initiative called Shikhya, for educating rural students with quality knowledge material.

Based on the Massive Open Online Courses (MOOC) model, Shikhya (now known as Aveti Learning) aims to bridge the urban-rural gap of quality education by creating learning content in more than 15 Indian languages, including Odia, so that it is both accessible and relatable for rural students.

“Education is an ever evolving field and it’s important for students to live in India’s villages to be exposed to the latest content, just like urban students. But, it’s also important that this information is relatable to them. And finding the right combination of the two was difficult, so we started to create our own and began to provide it to students in the remotest corners of Odisha, even in places with inconsistent electricity and an almost absent internet,” says the NRI techie.

Today, from a small coaching centre at Narigaon to more than 120 centres and 400 schools, their curriculum has swept all over the state and hopes to reach out to more in the country.
A “Swades” Moment for the NRI

Biswajit makes recurrent references to “Swades,” a Hindi film released in 2004, which is one of his favorites.

Much like the film’s protagonist, Biswajit grew up in Narigaon, a village in Odisha’s Jajpur district, and studied in the local school before pursuing BTech in software engineering from NIT Rourkela (1992-1996). The son of a school teacher, he says he was lucky enough to have understood the importance of education early in his life and worked hard to fulfill his big dreams of working abroad.

After working in India for a few years, he moved to California’s Silicon Valley in 1999, in pursuit of better opportunities. There, his career flourished, but a part of him still yearned to give back.

“Many people equate an NRI with the concept of ‘brain drain,’ and I am self-aware enough to know that I am in that category. I loved my job (and still do) but there was a gnawing feeling that I was not doing enough for my people, my village, all who had made some contribution to the person I am today,” shares Biswajit, who then began to visit his village in India, at least once a year.

Every time that he would go to Narigaon, he would involve himself in his father’s work by teaching the local students. And, it was during one of these visits that he found his purpose.

“This girl was a student of Class 5 and as I was teaching her basic math, I couldn’t help but notice how she was full of curiosity and determination to do better—solving that mathematics problem seemed to be the most important thing in the world for her. And, in that moment, I saw my younger self in her and realised that I had to make sure every child gets the opportunities once I was given,” adds Biswajit who then started a small tuition centre called Madhushudhan Shikya Kendra in the village.

From a ‘Gunda’ to an Entrepreneur

The encounter with the girl, who mirrored his own-self, was the first one that moved Biswajit. The next one was local goon.

“It was the time before Ganesh puja and several local goons would come and collect donations from various local businesses. They had heard about me and that I had just returned from the US and was starting this centre. One of them then, a boy in his twenties called Prakash decided to approach me and demanded for Rs 3,000 (a hefty sum compared to their usual charge). I noticed he was smart and potentially very resourceful, but due to the lack of proper upskilling and education opportunities, he was making his living through this route. At that moment I realised that I wasn’t very different from him, and if met with the same circumstances might have been in his place today. So instead of giving him the donation, I proposed a deal,” he says.

He asked Prakash to become the manager of the centre.

“Managing a tuition centre in the village, while keeping my job in the US was a difficult task for me, and despite several trials I was unable to find a reliable manager at the centre. Plus, even though I was from the village, my time abroad has disconnected me to the ground realities of the people and I needed a local to steer that and gain trust. Prakash with his connections, influence and administrative abilities was the perfect person for the job. In exchange for this, I decided to give him a salary of Rs 3,000 every single month, not just a one time ‘donation,” explains Biswajit, who credits Prakash for having helped Aveti Learning create a sustainable impact in all these years.

From creating a database of students, convincing parents, running as well as protecting the centre and helping Biswajit transform it into a larger fold, Prakash was the first changemaker-entrepreneur created under the initiatives of Aveti Learning.

Today, there are 120 people like Prakash across Odisha who independently run such coaching centres independently while using Aveti Learning’s smart learning curriculum. It is this network of local changemakers that has helped the initiative scale up through all these years, says Biswajit, who registered the organisation in 2017, under the official name of Aveti Learning.

He explains that each of these centres have been adopted by colleagues and friends abroad, who have sponsored all the smart learning equipment like the Aveti Learning tablets for students and other operational costs.

“I am hardly the only NRI who wants to give back to my country—so many of my friends and colleagues also wanted to do the same, but did not know where to begin. With this model, I showed how each of them could be a Mohan Bhargava (played by Shah Rukh Khan in Swades) in their own right, and create an ever-expanding cycle of sustainable change,” adds the NRI.

With a team of 18 members which include teachers and content creators, Aveti Learning through its centres has impacted over 8000 students. Additionally, their content on Youtube has also garnered massive impact with over 46,000 subscribers and over 25 lakh views on their videos.

Now on a sabbatical from work, Biswajit is working to strengthen the tech-based education platform and expand it to schools and centres not just in Odisha but across India. The smart learning content by Aveti Learning is now already being used in over 400 schools in the state.

“Being away, I feel more like a runaway general myself, not some hero. The true heroes behind Aveti Learning’s impact are the teachers, content creators and centre heads, who are helping make my dream come true- to see every child in rural India reach their full potential through quality education,” he concludes.

Source: The Better India
Posted by kranti at 4:00 AM