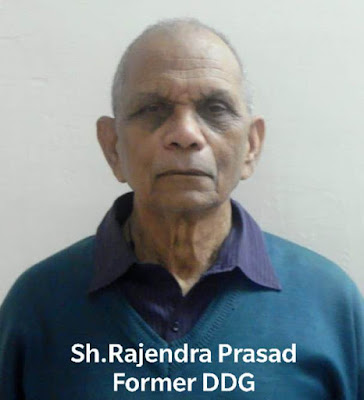 Sri Rajendra Prasad Former Dy. Director General (Program) and one of the most popular and successful program officers of AIR passed away at 11.00 am on 26-06-2020 at Kanpur. He had joined as Engineering Assistant at AIR Ranchi in 1955. After about 4 years he got selected as PEX and moved to program wing. He served at Varnasi, Kolkata, Jaipur and Allahbad as PEX. His programmes for armed forces from Guwahati - Troops , later Fauzi Bhaiyon ke Lye was very popular. He served as ASD at AIR Lucknow and then moved to AIR Chattarpur as Station Director. His contributions were enoromous and he became an extremely popular figure in region. His program on popilarising science - Vigyan Vatayan was another mile stone. As SD he also served at Allahbad, RatnagiriJaipur, Jallandhar and Lucknow. Dhrohar Kirti Kalash - a program on cultural heritage of India was another great contribution from him. His last tenure at AIR was Guwahati where he worked as Regional DDG ( Now termed as ADG P) and contributed immensely.  Shri Rajendra Prasad served as a very successful Program officer at AIR and is remembered with exceptionally great respect by his colleagues .

PB Parivar Volunteer talked to his youngest son Shri MLSrivastava and offered condolences. Shri Mukunda lal is an IFS officer serving as Principal Secretary, Forest and Enviornment and Principal Conservator of Forest, Sikkim. His eldest son Shri Kanhya lal is a senior UP PSC officer at Kanpur and the middle son Shri RK Lal is an IRTS officer serving as PCCM at western Railways, Mumbai.

Some of the early condolences we received .....
Sri Rajendra Prasad hailed from Jaunpur in UP. A scholar and an outstanding broadcaster. Remebering him Shri Thiruvengadam writes " His 'Fauji Bhaiyon' program broadcast live from AIR Guwahati in the years 70-72, was a great hit with our armed forces. It peaked during the 1971 war. Letters would flood the station. We both were PEXs in the station. I have lost a great friend. "

Patanjali Maduskar Shocking news. He was S.D.@A.I.R.Ratnagiri. May His soul rest in peace.

Deb Kumar Misra Very sad. I had the privilege of working with him in Cuttack, sometime in 87- 88. Lots of memories, involving him flash across now. May his soul rest in peace.

Prasar Bharati Parivar condoles the demise of Sri Rajendra Prasad and prays for the peace of the departed soul.