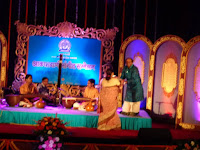 Tiruchy K. R. Kumar was born in a family of Music connoisseurs, in the year 1960 at Ayyampetta in Thanjavur District, Tamilnadu.
He started Mridangam practice at the tender age of six and later he started learning Ghatam under the guidance Tiruchy Sri. R. Thayumanavan, a famous Mridangam, Khanjira and Konnakol artist.
Gradually Kumar showed  interest in Ghatam and  he earned a good name in the field of Karnataka Music. He has developed his own style of playing Ghatam which attracted general public.  His performances are marked by perfect harmony between rhythm and melody.  Skill full finger movement and mastery over intricate Layapetterns. He brings beauty and  life to rhythm,  keeping the identity of Ghatam while performing along with Mridangam and other instrumentalists.

Apart from performing on the Ghatam and Mridangam, Kumar is also talented creative lyricist in Tamil and he was written many Devotional songs.  He wrote 3 Corona-Covid 19 songs which were  tuned and sung by him and broadcast over AIR Mangalore, Kalburgi, Raichur and many other Stations of All India Radio.
Tiruchy K. R. Kumar is a Selection Grade Ghatam Artist and also approved in Mridangam.  During this Covid-19 period a informal  send off was organised at Akashvani Recreation club hall and his contribution towards music section in All India Radio Mangalore is memorable permanently said Sooryanarayana Bhat, HOP of AIR Mangalore in his valedictory address.
Tiruchy K. R. Kumar is a very dedicated, hard working and disciplined employee of the organisation.
Prasar Bharati Parivar wishes him a very happy, healthy, peaceful and contended retired life.