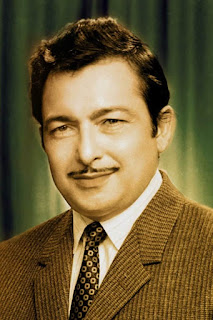 Mr. Madan Mohan joined the Army as a Second Lieutenant in the year 1943 where he served for two years until end of World War II.After World War II, he left the Army and returned to Bombay to pursue his musical interests.

In 1946, he joined the All India Radio, Lucknow as Programme Assistant, where he came in contact with various artists such as Ustad Faiyaz Khan, Ustad Ali Akbar Khan, Begum Akhtar, and Talat Mahmood. During these days he would also compose music for programmes to be broadcast on All India Radio.In 1947, he was transferred to All India Radio, Delhi where he worked for a short period.In 1947 he got his first chance to record two ghazals penned by Behzad Lucknawi, Aane Laga Hai Koi Nazar Jalwa Gar Mujhe and Is Raaz Ko Duniya Jaanti Hai.

In 1948 he recorded two more private ghazals penned by Deewan Sharar, Wo Aaye To Mahfil Mein Ithlaate Huye Aaye and Duniya Mujhe Kahti Hai Ke Main Tujhko Bhoolaa Doon.In 1948, he got his first opportunity to sing a film duet Pinjare Mein Bulbul Bole and Mera Chhotasa Dil Dole with Lata Mangeshkar under composer Ghulam Haider (composer) for the film Shaheed (1948 film), though these songs were never released or used in the film.

The late fifties, sixties and the early seventies were the most productive period in Madan Mohan's career.In 1970, during the changing times of western music he gave music based on ragas for Rajinder Singh Bedi's Dastak and won his only 1971 National Film Award for Best Music Direction.The ghazal he composed for the movie "Dil Ki Rahein" and "Rasm-e-ulfat ko nibhaein to nibhaein kaise" are considered as one of the best songs sung by Lata Mangeshkar, ever.Madan Mohan's son Sanjeev Kohli recreated 11 of his late father's unused compositions for the soundtrack of the 2004 Yash Chopra film Veer-Zaara.

He died of liver cirrhosis on 14th July 1975.
He was awarded the IIFA award 2005, for Music Direction for Veer-Zaara.

Forwarded by:-  P.K.Tripathi, Lucknow.
Posted by Jyoti Kaulwar at 4:00 AM