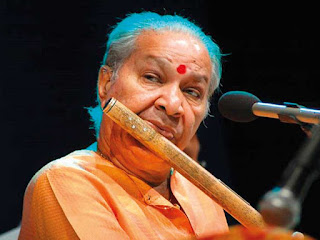 Born on July 1, 1938 in Allahabad, Uttar Pradesh, Chaurasia was just six-years-old when his mother passed away. His father, who was a wrestler, wanted Hariprasad too to take up the sport.

Formative years
So, rather than have him trained by others, he personally coached his son at home. The young boy, however, didn’t seem so enthused by wresting. Instead, he developed a liking for totally different field – that of music. He quietly attended his early lessons in music at a friend’s place without informing his father. At 15, he began undergoing vocal training from a neighbour named Rajaram. After hearing a bansuri (Indian flute) performance, he developed a keen interest in playing the instrument. He became a disciple of Guru Bholanath Prasanna, renowned flute player and teacher. That marked the beginning of his eight-year-long training stint.

Career
In 1957, he began working as a composer and performer at All India Radio in Cuttack, Odisha. In 1960, Chaurasia was transferred to Mumbai, where he met many renowned musicians. He evinced interest in attending music lessons from classical music teacher and surbahar (bass sitar) player Annapurna Devi. She agreed to take him under her wings on the condition that he would unlearn all that he knew. Chaurasia showed his commitment by switching his style to become a left-handed flute player.

Widening his horizon
In 1967, he and renowned santoor maestro Shivkumar Sharma began working in films under the assumed name Shiv-Hari. They also composed an instrumental album titled Call of the Valley for the EMI label. The album, that also featured guitarist Brij Bhushan Kabra, became very popular in India and abroad too. It received a good response from virtuosos across the world like George Harrison, Bob Dylan, Paul McCartney and David Crosby. The jamming of the slide-guitar played by Kabra and Chaurasia’s flute in the album gives the global audience a unique sound. Shiv-Hari composed the songs for movies such as Silsila, Chandni, Darr, Lamhe, Faasle, Sahibaan and Vijay.

In 1968, Chaurasia went on to collaborate with the world’s greatest rock n roll band, the Beatles. His flute was featured in the track titled The Inner Light, which was released as single. He also worked with other international musicians such as Jan Garbarek, Ken Lauber and John McLaughlin. The flautist popularised Hindustani classical music by touring and performing across the world. In 2006, he founded the Vrindavan Gurukul in Mumbai to train students in Hindustani classic music.

Interesting facts
Hariprasad Chaurasia once admitted though he was not interested in wrestling during his early years, the stamina and strength that he gained during his wrestling-training days still helps him in playing the flute to this day.

Unlike many classical musicians who have been part of families steeped in musical tradition, Chaurasia’s family had no background in music at all. He came, learned, played and changed the prevailing tradition. Rather than just follow a traditional style, the flute maestro is credited with not only having mastered the instrument but also developed a distinct style by dint of experimentation, dedication and rigorous practice.

A number of books have been written on Chaurasia’s extraordinary life as well as the immense contributions that he has made to music. His authoritative biography, titled Breath of Gold, was penned by Sathya Saran in 2019. Another book titled Hariprasad Chaurasia: Romance of the Bamboo Reed, was written by Uma Vasudev in 2005. In 2008, Surjit Singh authored yet another biography titled Woodwinds of Change on this great musician.