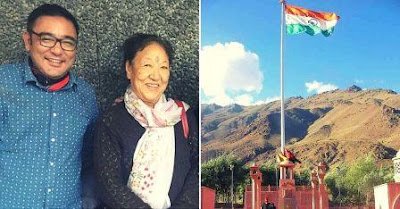 One evening in June 1999, during the ongoing Kargil War, the engineers at All India Radio (AIR) Kargil were forced to leave station due to the excessive shelling in and around the station, even though their broadcast was scheduled for 5 p.m. Amidst all the chaos, Tsering Angmo Shunu, Station Director, AIR, Leh and Kargil calmly called up the Brigade Commander at Kargil to help her with the broadcast. He directed a few soldiers her way, who helped AIR Kargil start their generator, which eventually allowed their broadcast to commence at 5 p.m.

The role of AIR during the war was critical in preventing the spread of any enemy propaganda or baseless rumours floated by Radio Pakistan ranging from the number of Indian soldiers killed to false claims of Indian army choppers being shot down. However, stationed there, Angmo was having none of it.

She not only continued broadcasting to counter the propaganda but also raised the morale of the soldiers by sending messages of encouragement to them. And when the Indian army needed people to assist their soldiers, she consistently shared the message and sent her 18-year-old son to help the army.
Broadcasting the News of the Kargil War

On 6 June 1999, Ladakhis tuned into news about the ongoing Kargil War on All India Radio (AIR). During the broadcast, however, there was a special announcement in Hindi. (Translated from Hindi) “The Indian Army needs porters to carry loads to the front. Please come forward to help; the country needs you,” said Angmo. In the following week, similar announcements were made on the radio requesting families to send their able-bodied sons to the Leh Polo Ground, where selections were being held. The announcement was made on the behest of Colonel Vinay Dutta, who had met Angmo the day before the first announcement was made. He had explained to her that young men were being recruited to raise a ‘Pioneer’ company for meeting the labour needs of assaulting battalions during the war.

“Colonel Dutta told me that there were no roads in the mountains and that the Indian army did not have enough porters or mules to carry food, ammunition and other necessities to the battlefront. He asked me if I could help by asking Ladakhi boys to volunteer for the task. I assured him I would do everything I could,” she told the author Rachna Bisht Rawat for her book ‘Kargil: Untold Stories from The War’, which was published last year. Every morning, she would tell her listeners, “The Indian Army is fighting for us; it is our turn to help them” in the middle of her scheduled broadcasts.
Sending Her Own Son to Volunteer

Born into a large family engaged in farming in Leh district, Angmo’s father was a Naib Tehsildar. After studying upto middle school in Leh, she moved to Kashmir. “After completing my MA first year, I got married and, therefore, had to discontinue my studies. I joined AIR Leh in 1975 as a program officer,” says Angmo, speaking to The Better India (TBI).

She fulfilled her mantra by not only running regular broadcasts at AIR Kargil even though it was coming under heavy shelling but also by asking her youngest son Stanzin Jaydun (Ricky), who was 18 at the time, to volunteer as a porter. Although Ricky was naturally apprehensive about volunteering, she convinced him to go.

Within just four days, 200 Ladakhi men like Ricky between the ages of 18 and 35 went to volunteer. What they brought to the table was not only their burning desire to protect the motherland but bodies that were accustomed to the weather, altitude and terrain.

Dividing them into two platoons of 100 porters each, they were ferried to Biama, a small village between Dah and Hanu which is about eight hours away from Leh on Army trucks. At Biama, the boys lived in camps on the land of farmers growing tomatoes. By the end of the week, the number of volunteers had increased to 800. For the next two months, they helped any infantry battalion that needed their assistance. They assisted units fighting in the most critical and challenging sectors like Batalik-Yaldor-Chorbat La sector. While average porters carry as much as 10 kgs on their back, these Ladakhi men carried 30 kgs, according to the book.

Yes, they were paid a daily wage for it, but for them, the entire endeavor was about serving the nation and helping the army in any capacity. “Some of the boys also helped in evacuating the dead and injured soldiers; we all knew what a high price our soldiers were paying in the war. We wanted to do our bit,” says Ricky, speaking to Rachna. Biama was bang in the middle of the enemy army’s shelling zone. Whenever heavy shelling would commence, they would hide behind a water tank nearby.Indian soldiers in Batalik during the Kargil War.

In any war, the most vulnerable installations are the ones dedicated to communication, particularly mass communication. AIR Kargil, for example, came under regular shelling and some had contemplated closure of the station to protect the local staff. “The moment shelling started, we would jump in and speed away to a small village called Mingi 15 km away towards Zanskar, which was out of the enemy’s shelling range. We had rented a room there and often all of us (Staff at AIR Kargil) would sleep on the floor and then go back after the shelling stopped to continue with our radio transmission,” she remembers.

Moreover, the local radio station even asked civilians to spare mules to help carry the army’s loads to the heights where the fighting was ongoing. There were days when nearly 300 Pakistani shells would land in Kargil, but work never stopped for a single day. The army would warn them to switch off all their lights at night time to ensure the building didn’t get bombed. Before switching on any light, they would draw the curtains and close the windows.

“There was daily shelling from the Pakistani side. A lot of the shells fell into the compound of the radio station. The hostel was destroyed. Some of my colleagues barely escaped with their lives. The town was deserted. The military told us to keep the lights off, but the shells kept falling anyway. I improvised to keep the station running. Sometimes, the technicians refused to cooperate, and I had to ask the military technicians to start the transmission. Rules and regulations never work during times of war. People from Delhi even told us to flee to save ourselves, but I remained stuck to my decision to keep the station running,” she tells TBI while recalling those days.