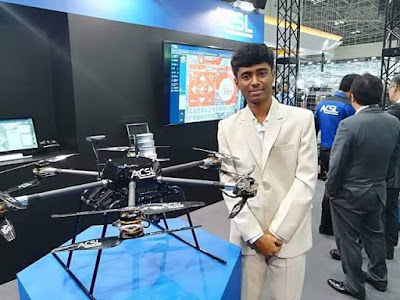 He is Pratap aged 21 years. He travels 28 days in a month to foreign countries.France has invited him to join their Organisations for which he will be provided with monthly salary of Rs 16 Lakhs, 5 BHK house and Car worth 2.5Cr.But he simply declined. PM Modi has honored him with suitable award and has asked DRDO to absorb him.
Let us see what this boy from Karnataka has achieved.

*Part 1*
He was born in a remote village in Kadaikudi near Mysore Karnataka. His father earns Rs 2000 as a farmer. Pratap was interested in Electronics right from childhood. While studying plus 2 he acquainted himself with various websites such as Aviation ,Space, Rolls Royce car, Boeing 777 etc from a nearby Cybercafe .He sent several emails to Scientists all over the world in his Butler English about his interest to work but in vain . He wanted to join Engg but due to financial problems he joined BSc ( Physics) again unable to complete the same. He was thrown out of hostel for not paying the hostel fees. He used to sleep in Mysore Bus stand and used to wash his clothes in public toilet. He learnt computer languages such asC++JavaCore and Python on his own. He learnt about *Drone* through eWaste. After 80 attempts he succeeded developing one such Drone.

*Part 2*
He went to IIT Delhi in rags in a unreserved compartment to participate in Drone model competition. He won *Second prize*.He was told to participate in a competition in Japan. To go to Japan an academic Professor in Chennai college has to approve his thesis .He went to Chennai for the first time and with great difficulty that Prof approved him with some comments that he is not qualified to write it.

Pratap required Rs60000 to go to Japan ,a philanthropist from Mysore sponsored his flight ticket and balance money he made up by selling his mother's Mangala Sutra. Somehow he reached Tokyo after going in his maiden flight to Japan all alone. He had only Rs 1400 when he landed there. He didn't take Bullet train since it was very expensive so he went by normal train by changing trains at 16 different stations with his luggage to reach his last station. He walked another 8 km to reach the ultimate destination with his luggage.

He participated in a Exposition where 127 nations were participating.The results were announced in a graded manner and finally top 10 . Pratap dejectedly started walking back and slowly the judges were inching to top 3,2, and finally the First prize was announced as *Please welcome Mr Pratap Gold Medalist from India*.He was crying with joy. He saw with his own eyes USA flag going down and Indian flag going up. He was rewarded with 10000$ and celebrations followed everywhere. He was called by PM Modi ,Karnataka MLA & MP and was honoured by all. France offered him a job with all the perks of very high order. He simply refused and now PM has honoured him and has asked DRDO to absorb him.

Credit : https://www.organiser.org/Encyc/2020/7/5/Inspiring-story-of-award-winning-Drone-scientist-Pratap-in-achieving-against-all-odds.html
Posted by Hillary at 4:00 AM