Inspirational:Born Visually Impaired, 15 YO Overcame Bullying To Inspire Many With Songs, Words 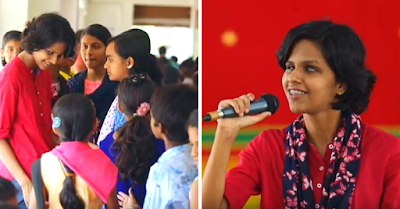 Hannah Alice Simon, 15, had to face a lot of difficulties in her childhood. Being visually-impaired from birth, Hannah didn’t have many friends to play with and went through a lot of bullying from other children, being often called a ‘ghost’ or a ‘devil’.“Infants would start crying because my eyes would scare them. This hurt me the most because I loved to hold babies and play with them,” says 15-year old Hannah.Hannah was diagnosed with a condition called Microphthalmia where the eyeballs don’t fully develop or develop at all. Although her parents tried everything they could to improve her condition, nothing seemed to work.But overcoming all odds, today Hannah is the youngest and sought after motivational speakers in Kerala. She has also written and recorded many songs for her YouTube Channel which has almost 1000 subscribers and has garnered over 20,000 views.

“My mother is my biggest inspiration. When I was just about six years old she approached a teacher and learnt the Braille language so that things could get easier for me. She always made sure that there was no difference between me and my younger brothers Hanok and Daniel, and I’ve never felt that either,” she shares.“I decided to learn Braille first because, as her mother, I knew that it would be easier for her if I taught her,” says Lija.
Hannah, who is currently a 10th-grade student at Kakkanad Rajagiri school, says that without her parents’ support she would never have been able to come out of the dark space of loneliness and fear.
“Even thinking about the first few years after Hannah was born is difficult for me. I would see her struggling to make friends and mingle with the other children. But things became a lot easier when we had Hanok and Daniel. She developed a comfort zone with them and felt that she finally had someone to count on, other than us,” explains mother Lija.

Finding her Way Back to Music

It was Hannah’s father who kindled the love for stories and music in her. “My dad would read stories to me every day and he’s the reason I was motivated enough to write stories and songs and even go for singing lessons,” says Hannah.“But at one point in my life, the singing really got to me. My teachers used to ask me to sing at every other school program and I almost lost interest in singing. That’s when I met Radhika ma’am at the ‘Soul of Music’ school. Her passion for music rekindled the interest in me and there was no turning back from there. I continuously started writing songs and doing covers for my Youtube channel. It was from there that my journey truly started.” she adds.

“Today, I don’t feel the need to have my eyesight back. From my very childhood, my parents have instilled a confidence within me that always motivated me to live upto my potential. “ she explains. “Everyone will have to face a lot of difficulties and obstacles in their life, but it’s how we deal with it that makes us who we are,” Hannah concludes.

Source:The better India
Posted by Rashmi Rimjhim at 4:00 AM