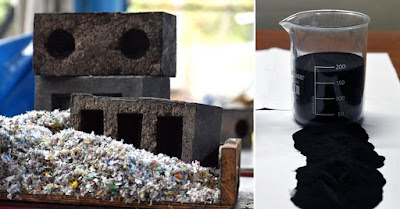 If you’re thinking of building your dream home, your first thought will be about bricks.

India is the second-largest brick manufacturer in the world, with the Indo-Gangetic plains producing more than 65 per cent of the total production in the country. But, did you know that brick kilns are also major contributors to environmental pollution?

The industry is the largest user of coal (used to fire the bricks) in the country and a significant cause of air pollution, and also leads to the loss of fertile topsoil.

Gujarat-based entrepreneur Manish Kothari came up with an ingenious solution to this pertinent problem. The owner and managing director of Rhino Machines, a project consultancy firm, presents Rhino bricks, made from foundry dust and waste plastic!

As opposed to clay brick, Rhino bricks are 2.5 times stronger and 25 per cent lighter. They are also reasonably priced at Rs 10 per piece, making them cost-effective.

“There is no use of water in the making of these bricks. Also, more water is saved during the construction process, as the walls built with these bricks do not need to be cured with water,” explains 52-year-old Manish.

Rhino Machines manufactures these bricks and paver blocks (made from the same mixture of plastic and foundry dust) in collaboration with R+D Labs (an offshoot of R+D Studio, an architectural firm) that helps them with research and development. Launched in February 2020, they have already received orders of over 1,000 bricks and 650 paver blocks. They have also received inquiries from Chile, Colombia, and China.

Entrepreneur Manish explains what led to this idea.

Rhino Machines was founded in 1984 by Manish’s father as a project consultant engineering firm. Later, Manish graduated as a Mechanical Engineer and registered the firm as a company in 1996. They have been catering to the technological needs of the foundry industry for years.

“The foundry industry in India is the second-largest in the world after China. India produces almost 10-12 million castings every year. For every tonne of casting that the industry makes, about 800 kg of sand is used,” explains Manish.

This sand can be used to make metal castings. It is cleaned and reused in the same process.

“At Rhino Machines, we provide the technology to break down large sand moulds. Moreover, we also set up plants for clients in the foundry industry to clean and process the sand, so it can be reused through the green sand reclamation process. While 70 per cent of the total sand can be reused, the other 30 per cent, in the form of foundry dust, is too fine to be used again,” he explains.

Source: The Better India
Posted by kranti at 4:00 AM