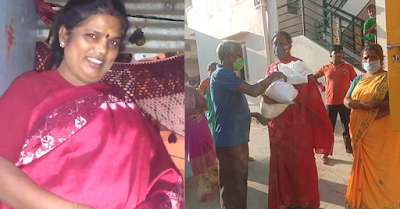 S Veena, a transgender from Bengaluru is ensuring that she keeps her community well fed and protected during this COVID-19 lockdown.


The day the lockdown was announced, I understood that it was going to impact our neighbourhood. This is my home – I was born and brought up here and to see people here suffering was something that I could not turn a blind eye to,” says Veena.Since a large number of families in the area are daily wage labourers like domestic help, construction workers, and even street hawkers, the lockdown meant no income for all of them, which had a direct impact on their food consumption.
So, Veena decided to ensure that none of them would go hungry.“Initially we were cooking and distributing almost 50 kgs of rice every day–and ended up giving away almost 300 such parcels. Of this number, more than 200 parcels were distributed amongst the transgender community in Okalipuram, and the rest were for the slum dwellers,” she says.

How is she managing the funding for this activity?

“We get a lot of support from various NGOs – Swaraj Abhiyan is one amongst the major donors, and then even Solidarity Foundation extends support as and when they can.”
Until 5 April 2020, Veena was getting the food made and distributing it. However, impressed with her work, a local restaurant named Adyar Anand Bhavan decided to help her cause.
“Now I get almost 1200 food packets, for lunch and dinner, from this restaurant, which I distribute amongst my people,” she says.Veena mentions that in the initial days of food distribution, no one stepped forward to help her. However, now that things are streamlined, many locals have stepped forward to applaud her efforts and lend their support. Many of whom also accompany Veena during her distribution drives.

“Sometimes, people just want to talk or have someone sit beside them and hear them out. On my part, I try my best to ensure that their basic needs are met. We are a vulnerable community, and it is in times like this when the support that we need is much more. I am glad that I can help,” she concludes.

Posted by Rashmi Rimjhim at 4:00 AM