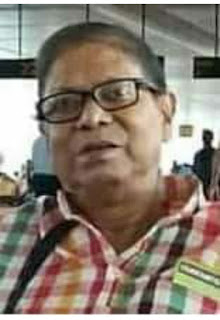 With profound grief it is intimated that our beloved former colleague Sajay Dasgupta of Production wing of Doordarshan Kendra, Kolkata, passed away in Kolkata on 26. . He was 68 years old and is survived by his wife daughter, son in law and grandchild.Apart from his acumen in production including live news and programme, he was also known for his several important live OB productions of current affairs, talk shows, ceremonies and entertainment programmes. He produced many documentaries, which brought him much acclaim.

He gave leadership in the movement of Doordarshan programme personnel for autonomy of the organisation. He was the General Secretary of the All India Joint Action Council if Doordarshan Progeamme Staff.

He will be remembered for his friendly attitude to his colleagues, cutting across sections, wings, departments, locations and ranks. His colleagues and admirers paid him a rich tribute to their departed leader, friend and companion.

Prasar Bharati Parivar condoles the demise of Shri. Sajay Dasgupta and prays to the almighty for the peace of the departed soul.