PREMKUMAR P. WELLINGTON, AIR MYSORE AND HIS FAMILY HAVE COME OUT WITH UNIQUE AWARENESS SONGS IN THREE LANGUAGES FOR GENERATING AWARENESS ON COVID-19

Master P. Praneel, studying in Class IV in St. Joseph’s Central School, Vijayanagar, Mysore, son of Mr. Premkumar P. Wellington, All India Radio, Mysore and Dr. Vijayalakshmi Manapura, Assistant Professor, Maharaja’s College, University of Mysore, has sung the Awareness Song in Hindi Language titled “Killer Corona ; Mahamaari Kaa Kaala Saayaa” in rich, sweet and melodious voice is widely shared across the Country through Social Networking Medias/Websites and has become popular and has been appreciated all over India. The song call people, to change their lifestyle and adopt hygiene practices to fight the pandemic and avoid handshakes as well as physical proximity to others, asks senior citizen and children who are prone to the infection to stay indoors, maintain Social Distancing and follow Government Orders. Notably, the song highlights fake news Covid-19 and speaks about the contribution of health workers who are in the frontline fighting the pandemic. This song also lessens the burden of District Administration in spreading awareness among masses.

Master P. Praneel of Class IV said, “The motto of the song is to create and generate awareness on Covid-19 and to bring back normal situation in our Motherland India” 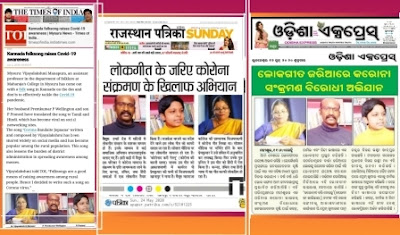 Contributed by :- Shri. Premkumar P. Wellington, All India Radio, Mysore.
Posted by PRASAD KARADKAR at 11:00 AM