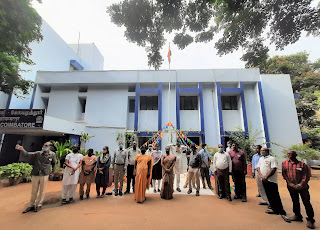 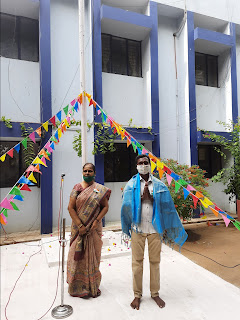 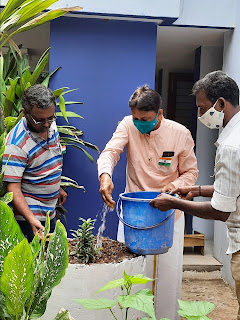 74th Independence Day Celebrations in the premises of All India Radio, Coimbatore was marked with sobriety, members of staff maintained social distance wearing masks. The honours of hoisting the national flag was done by HOO & Programme Head Smt. K. Chitralega Sukumar, ADP.
Keeping in view of the prevailing pandemic situation, the 21st Birthday of FM Rainbow Channel of AIR, Coimbatore which falls on Independence Day (launched on 15th August, 2000) was observed in a low-key manner by mounting symbolic programmes like greetings recorded over phone of various celebrities associated with FM Rainbow over a period of two decades in addition to special shows.

Everyone is aware of the role played by sanitation workers who are in the forefront of fighting against COVID-19.  The dedicated effort of one casual sanitation worker Shri Nagarajan at All India Radio, Coimbatore was honoured by Smt. Chitralega with a shawl & cash contributed by staff.

Not losing the sight in view of the celebratory mood, tree plantation drive was also launched befitting the occasion.